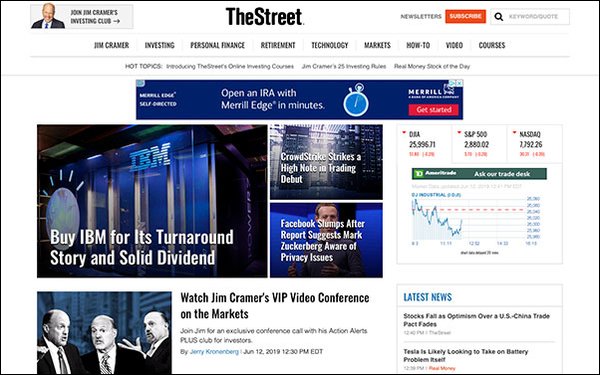 Maven has acquired TheStreet, a 20-year-old financial news and information provider for investors, for $16.5 million.

This marks Maven’s third acquisition in the last year. It acquired HubPages and Say Media in 2018 and merged them together.

Maven comprises a network of small- and medium-sized independent publishers that operate on the company’s shared digital publishing, advertising and distribution platform.

Maven has 270 independent publisher partners, including History, Maxim, Yoga Journal and Ski Magazine, which draw over 100 million monthly users, according to the company.

TheStreet will form the core of a finance vertical at Maven, covering categories like long and short equities and bond ideas, commodities, crypto, macro, taxes, retirement and cybersecurity.

Stated Eric Lundberg, CEO-CFO of TheStreet stated: "We've seen the power of the Maven platform ... together, that kind of scale provides critical mass to propel our growth.” TheStreet has access to a network of analysts and thousands of subscribers.

The combined companies say they expect to generate more than $50 million in revenue over the next four quarters.

A subsidiary of Maven will acquire all the outstanding common shares of TheStreet. The transaction, which is expected to close in the third quarter, is funded through debt financing by a subsidiary of B Riley Financial, Inc.