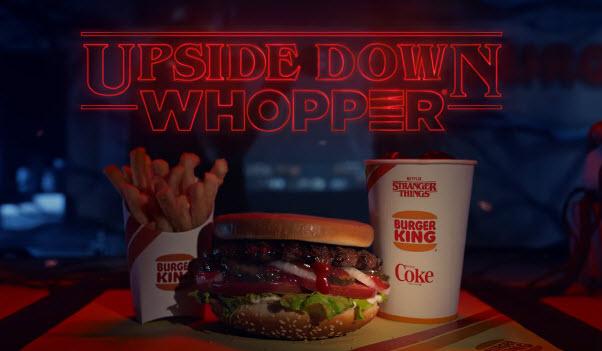 Burger King, Coca-Cola and Netflix have teamed on some suitably odd promotions to capitalize on the July 4 premiere of the third season of “Stranger Things.”

Burger King is looking to derive maximum buzz with minimum operational disruption by offering an upside-down Whopper (same ingredients, but served upside down in a special package) in 11 restaurants across 10 major U.S. markets. The “while supplies last” offer, available to those who order a Whopper meal,  starts June 21.

In another limited-time promotion, consumers can enter an instant-win sweeps by buying a Coke at any BK location, opening BK’s app, and scanning an icon on the cup. More than 100,000 prizes will be awarded per day through July 27, including food, cash, airline tickets, a car and a “Stranger Things” VIP experience.

The Whopper and Coke offers are being promoted with a video (below) that’s a takeoff on the opening title sequence of “Stranger Things.” David Miami is the lead creative agency.

BK will also offer a $5, no-delivery-fee “Hopper Meal” (named after a key character in the series) on orders made through DoorDash, starting June 13. Orders of $10 or more through June 20 (using a “STRANGER” code) come with access to exclusive "Stranger Things" content. The $5, no-delivery-fee offer, sans content access, continues June 21 to July 7, with the code “HOPPER.”