ABC's 'Grand Hotel' Is Exactly What It Is Supposed To Be: Fun 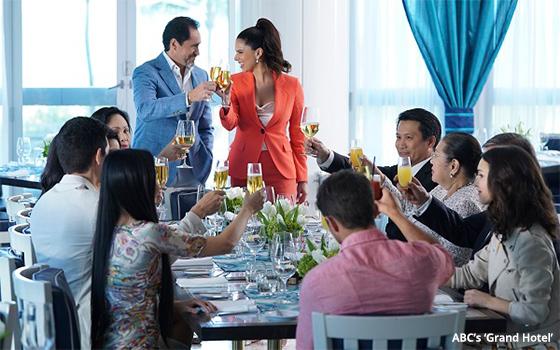 The thing about some TV shows is that they defy criticism.

For example, this new prime-time summer soap called “Grand Hotel,” premiering Monday night on ABC, is exactly what it purports to be.

This show is about as deep as a puddle after a light rain. It will never be confused with any number of TV shows from the past two decades that were critically acclaimed. No critic worth his or her salt will ever “acclaim” “Grand Hotel.”

But if they gave an Emmy for truth in advertising, this show would win one. The promos indicate it will be a frothy soap about warring family members set against the backdrop of a sexy Miami Beach hotel. And that is exactly what it is.

This fictional hotel, the Riviera Grand, is billed as the last family-owned mega-hotel on the famous beach, but it might now be for sale following the marriage of the long-time owner to a new, second wife who quickly establishes herself as an unsentimental schemer.

Thus, the show pits this man's grown siblings vs. the grown siblings of his new wife for control of this hotel and all it represents. To the newcomers, it just represents an opportunity to get rich from the property's sale.

To the siblings who are in line to inherit the hotel, it represents their past happiness in growing up there, and a future filled with the same kinds of memories. The only problem is that the hotel is in all sorts of trouble -- principally financial.

“Grand Hotel” is a prime-time soap with a decidedly Latino flavor. Eva Longoria is among its executive producers. But its appeal will not necessarily be limited to Latin audiences.

Like many another prime-time soap, dating all the way back to “Dallas” and “Dynasty,” the characters in “Grand Hotel” each seem to be harboring more than their fair share of personal secrets.

In the series premiere, these secrets seem to get revealed every few minutes or so. Whether or not this pace can be sustained through the run of the series remains to be seen.

While the TV Blog has never been a particular fan of these over-the-top prime-time soaps, that should not stop anyone from enjoying this one. The premiere episode was a pleasure to watch, and after it was over, I have to admit I wanted to see more.

What can I say? The show was fun. And since I have spent more than a few TV Blogs lately complaining about the lack of fun on TV, then I will be the last to complain about a show as fun as this one.