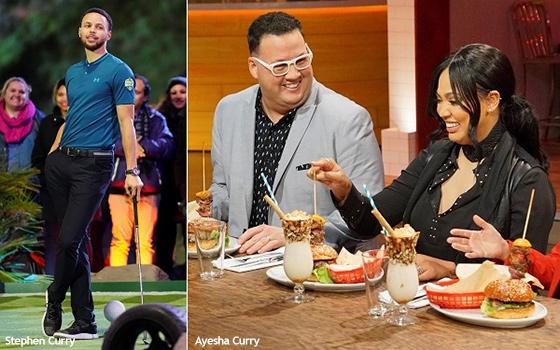 It would not have been too surprising to discover that the new ABC summer series called “Family Food Fight” was a show in which members of rival families literally flung food at each other for an hour.

To a TV critic, such an idea does not seem farfetched or out of the question for a TV network. This is particularly true in the summer, when TV sometimes gets dumbed down even farther than during the fall-to-spring regular season.

But no -- “Family Food Fight” is a cooking-competition show pitting families against families in a contest aimed at finding America’s best cooking family. Staged in a studio comprising three separate kitchen spaces, the action unfolds before a panel of judges, just like a dozen or so other shows on TV today, from the Food Network to Fox.

No food was flung in the premiere episode, airing this Thursday night, that ABC provided for preview.

Not that there is anything particularly wrong with a TV network mounting yet another one of these cooking competition shows. At the same time, however, it behooves a TV critic to point out that TV is playing copycat once again, even if this tendency is (a) obvious to all and (b) has been going on in the TV industry since approximately the dawn of the television age.

The one-hour “Family Food Fight” is being paired this Thursday night on ABC with an even more ridiculous one-hour competition show that seems especially suitable for summer -- an outlandish show called “Holey Moley” in which contestants compete in the ever-popular “sport” of miniature golf, a summer pastime if there ever was one.

The producers of this show, along with their network overseers (presumably), deserve credit for acknowledging early and often during the one-hour “Holey Moley” that the whole thing is a joke, and also a blatant example of absurd network television-style excess.

The duty to make this point clear in word and deed goes principally to the show's co-commentators, Joe Tessitore, the very real-life commentator and sportscaster for Disney-owned ESPN, and comedian Rob Riggle, who applies just the right touch to “playing” a deadpan sportscaster.

The two even don yellow blazers -- the famous “uniform” of ABC Sports talent that has been seen on ABC probably since the advent of color television in the 1960s.

Both “Holey Moley” and “Family Food Fight” come with an ingredient in common -- Curry -- as in NBA star Stephen Curry and his wife, Ayesha Curry. She is a judge and the nominal host on “Family Food Fight.” And he is seen on the miniature golf show for no apparent reason, which even he acknowledges at the outset of the show.

Neither show is taxing, but at the same time, it is hard for the TV Blog to understand why on Earth anyone would watch ABC for two hours on Thursday evening in order to consume both of these shows back to back.

Let the record show that the competition in “Holey Moley” does not take place on any ordinary miniature golf course. Instead, the game is played on a 10-hole course especially designed and built for the show.

On this course, the obstacles are not only in position to block the ball, but also the players themselves. This creates several cringe-worthy moments as players are challenged to run through the obstacles that they just hit their balls through. One of the contestants actually seems to get pretty beat up as the giant blades of a windmill knock her clean off the green and into some fake flowers.

As if seeing it once was not sufficiently uncomfortable, the incidents are played over and over in slow-motion, while Riggle makes jokes about how much it must have hurt.

Questionable taste? Of course! But this is 2019, and “taste” has not meant much in the TV business for about as long as anyone alive today cares to remember.