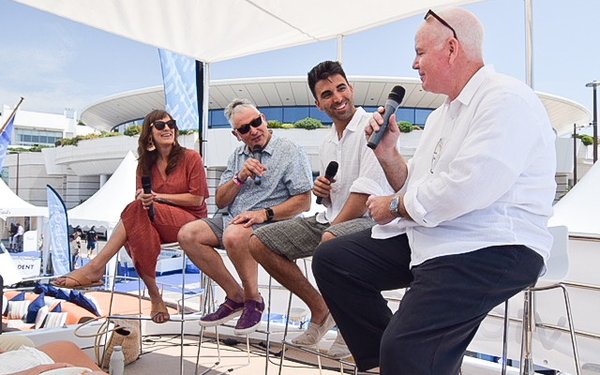 CANNES, FRANCE -- Addressable TV is projected to transform buying and selling across media channels, but ad execs discussing it here mainly expressed their frustrations over the slow pace of progress.

Additionally, panelists during a Cannes Media Lions aboard the VideoAmp yacht here said advertisers are scared of transitioning away from the tried-and-true media options, because those are the only universally agreed upon formats, regardless of their effectiveness.

Clients continue to request forward-thinking measurement numbers, but then they add that say they need to make it look more like Nielsen numbers, said Jodie McAfee, senior vice president-sales and marketing at Vizio's Inscape unit on Tuesday.

McAfee was joined by Jonathan Steuer, Chief Research Officer of Omnicom Media Group; Ross McCray, Co-Founder and CEO of VideoAmp; and moderator Joanna O'Connell, vice president and principal analyst at Forrester Research to discuss the challenges and opportunities in transitioning the ad industry from its current measurement systems towards models of the future.

"It is a massive shift to get them to wean them off of yesterday's data structure," Inscape's McAfee groused.

This challenge is because buyers have never "seen a concrete alternative to take away their security blanket," noted Omnicom's Steuer, adding this is a new thing to learn. "There isn't a standard way to point to in the marketplace."

Panelists said the solution would come in two phases. The first one will concentrate on educating advertisers and media buyers.

The second phase will demonstrate the value addressable providers add to the mix.

VideoAmp's McCray said his company experiences roadblocks when it tries to entice buyers to experiment with new funnels of information.

"I love what you do and hear what you are saying, but we have to justify the costs," McCray said.

As a result, he said VideoAmp compares its own data with Kantar and linear TV data to demonstrate its enhanced insights.

One luxury automaker, he said, used VideoAmp to learn Nickelodeon was an untapped opportunity, an interesting metric since viewers aren't likely to be of driving age.

Nonetheless, panelists conceded the most likely strategy towards the embrace among these new data portals will be a "bridge" that relies on legacy providers until these newer forms reach the tipping point of acceptability.