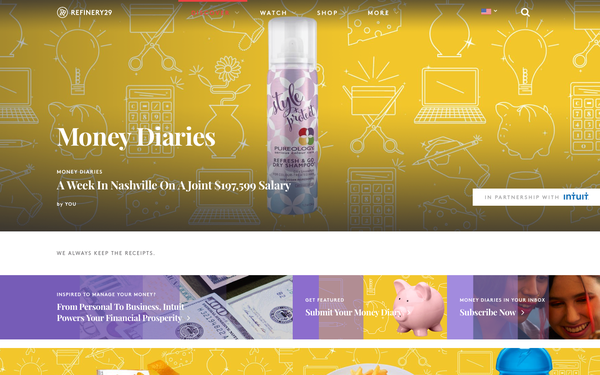 The first series, set to be released by year’s-end, is a scripted adaptation of Refinery29’s personal-finance column, podcast and book “Money Diaries." According to the story, users of the new series will be able to take the reins of the characters' spending habits.

“Money Diaries” counted 7 million unique visitors in 2018, making it Refinery29’s top financial editorial series. Since launching the brand in 2016, Refinery29 published a book spinoff called "Money Diaries: Everything You’ve Ever Wanted To Know About Your Finances… And Everyone Else’s" and launched a Money Diaries podcast.

Refinery29 and Walmart-backed Eko plan to launch other unscripted shows, based on the travel series “60 Second Cities” and the millennial women-focused show “Sweet Digs.”

Refinery29 and Eko will split revenue culled from the series and plan to sell ads and sponsorships around each one. The series will be promoted across digital platforms and social media.

Eko will hold ownership of all interactive assets, said Variety.

Refinery29 also reported it will use the opportunity of working with Eko to bring more women creators into the fold.

Following Walmart’s $250 million investment in Eko last year, the platform has worked with BuzzFeed on a collection of interactive videos. It has also produced projects for Walmart-owned Vudu and its platform HelloEko.com.

As TechCrunch notes, as users make choices across Eko-produced videos, media companies can use that data to create content poised for deeper interaction, along with allowing for personalization of the content. The outlet gives the example of BuzzFeed, which could allow users to account for dietary restrictions in some recipe videos.
online publishing, online video, web sites
Next story loading