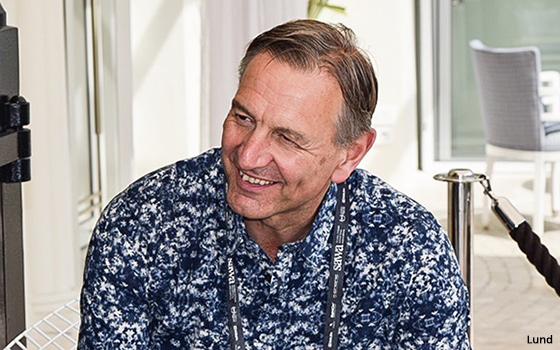 CANNES, FRANCE--For McCann Worldgroup UK, one positive in the Brexit drama is that it has focused the agency group more intently on the world outside of London, says CEO Mark Lund. "We now have 1,000 people outside of M25" -- a nickname given by the British to refer to the London commuter belt.

Birmingham is one of the group's fastest-growing offices. The IPG-owned shop is also opening a dedicated office in Manchester centered around "how to work with Amazon," whether it is as a medium, competitor or retailer.

Now, says Lund, "we represent the whole country." He adds that this development has enhanced the agency's creative insights.

The hub of the network remains in London as Lund is uniting the city-based businesses in a new facility designed to fit 1,000 staffers by the end of the year. "It is very demanding to create a new home," he says.

He finds millennials request two things with their new workspace. "They want to know where they can park their bike and easily make it upstairs. Second, they want to bring their dogs. Pet friendliness is a huge draw." (At the moment, his agency currently has two regular visiting dogs.)

Lund’s overall Brexit concerns have lessened over three years, especially because McCann has performed strongly despite the uncertainty. "I am not sure what happens if we are cut off from the world, but we will continue our creative momentum."

Lund is unsure what will happen if the likely new Prime Minister is Boris Johnson. "It will be very interesting."

While parent IPG is initially focusing on making Acxiom's data immediately available to media-buying brands, Lund is currently working with the company's global head of development to explore opportunities within the creative agency's purview. "What can we do with dynamic creative?" He asks. "We want to make real-time personalization possible."

Acxiom talent is fitting nicely with IPG because they are "clearly very bright, but also speak in human terms," alluding to the tendency among most in the tech industry to sprout jargon. "We are matching easily with the data guys."

This week, the U.K.’s Advertising Standards Authority introduced a new rule banning harmful gender stereotypes in ads. Now, U.K. advertisers must not include gender stereotypes that are likely to cause harm, or serious or widespread offense.

Most of the banned images are "no longer current," Lund says. It's lazy to show women who can't drive or only women in the kitchen.

Lund cites McCann's leadership in purpose-driven advertising done in the right way, as evidenced by the award-winning Fearless Girl.

This year, the agency is receiving recognition during the Cannes festival for the special "non-age" edition of Vogue developed with L'Oreal that used only people over 55. "We called it the non-issue because age shouldn't be a topic. It's fascinating that over 55% of Vogue readers are over 50, but only 10% appear in the pages," he says.

The issue, which was published three months ago and features L'Oreal spokespeople Jane Fonda and Helen Mirren, outsold normal editions both in the UK and France. It wasn't just older women who were appreciative of the message, he says. "The daughters of these older women are buying stuff, too. They think it is a great thing."