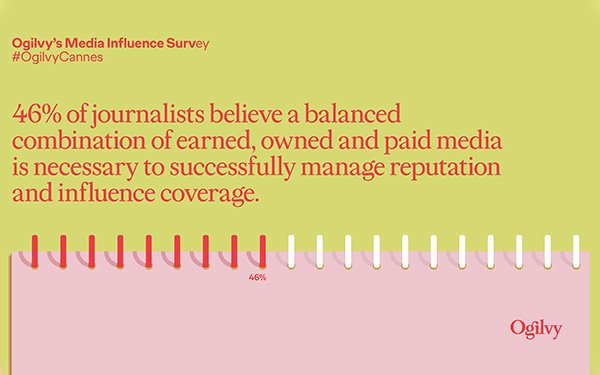 Twitter is the most influential social-media platform for journalists worldwide, according to Ogilvy’s sixth annual Global Media Influence Survey.

The survey, released at Cannes Lion today, highlights new strategies in digital media and the sentiments of journalists regarding media coverage and brand reputation.

The survey included 311 journalists who covered a range of topics, from national news to entertainment.

Twitter is the social-media platform that most often informs reporters’ coverage, according to 48% of the journalists included here. Some 29% cited Facebook or Instagram, and 17% pointed at WhatsApp.

“On average, earned coverage appears to live longest on Twitter, likely due to its ability to compile major headlines of the day and streamline the discovery process for users never having to leave the platform,” stated Tara Mullins, senior vice president, Ogilvy’s Media Influence.

Also, 46% of reporters believe a combination of earned, owned and paid media is necessary to successfully manage corporate reputation and influence coverage.

A majority of North American reporters in the survey believe their coverage has only “some” impact on shaping reputation (61%), compared to their counterparts in the APAC, EMEA and Latin American regions, who say they have “a lot” of influence (53%, 61% and 79%, respectively).