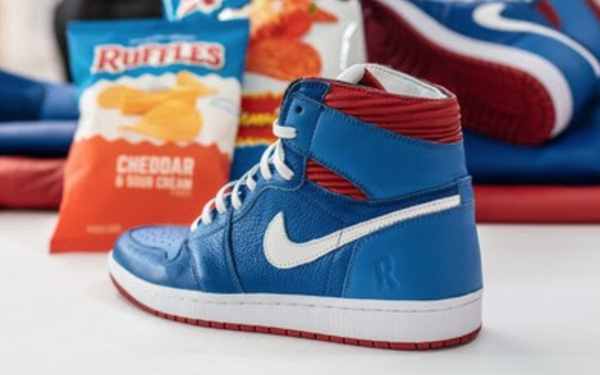 Ruffles, the official chip of the NBA, has signed a deal with six-time NBA All-Star Anthony Davis.

To announce the collaboration, Davis visited the flagship NBA Store in New York to debut the Ruffles-inspired signature shoe, The Ruffles Ridge Tops, designed by the  Surgeon of Los Angeles with input from Davis.

From June 24 to Aug. 4, fans who purchase a bag of Ruffles and enter the on-pack code will have a chance to win fashion and sports items daily and the grand prize of a pair of the Ruffles and Davis-crafted sneakers

Each Ruffles Ridge Tops sneaker was handmade and sport the colors of a Ruffles bag and interchangeable shoelaces inspired by the shades of fans' favorite Ruffles flavors. A hidden pocket with a silver lining and ribbed accent near the heel of the shoe allude to the experience of opening a Ruffles bag and the silhouette of the ridged chip.

And like the ingredients box on any chip bag, on the tongue of the shoe are "Shoetrition Facts" detailing both the material and intangible elements that were necessary to bring this shoe to life.

Since entering the NBA as the overall No. 1 pick in 2012, Davis has been sponsored by companies ranging from Nike and Red Bull to Saks Fifth Avenue and ExxonMobil, according to Front Office Sports.