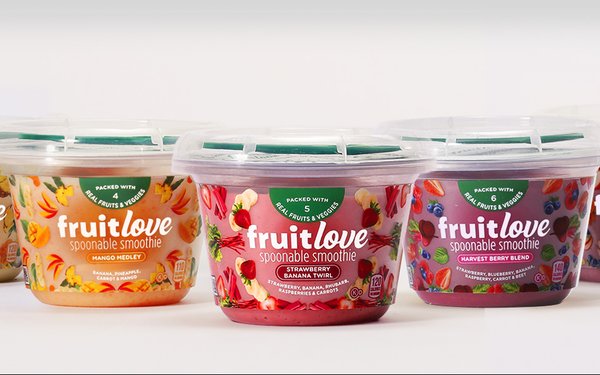 In its first move into the yogurt/smoothie market, Kraft Heinz is introducing Fruitlove, a spoonable smoothie that combines  yogurt with servings of three or more fruits and vegetables.

The product is packaged with its own green plastic spoon.

“We know that snacking is both functional and emotional and Americans want more from the foods they snack on – more flavor, nutrition and a better overall taste experience,” stated Nicole Kulwicki, head of brand building at Fruitlove. “Fruitlove was born from the idea that we could create a better and more exciting way to snack on smoothies.”

The company is taking advantage of National Smoothie Day on June 21 by allowing consumers to try a Fruitlove spoonable smoothie for free through redemption at ibotta.com.

The launch will also be accompanied by a targeted social, digital, and online video campaign.

Fruitlove is available in the yogurt aisle of grocery stores nationwide and through select Amazon Fresh locations for an SRP of $1.99.

According to a consumer study by Kashi, "more than one in four Americans typically consume smoothies on a regular basis," with "32% drinking them to feel healthier and to incorporate more fruit in their diets. Additionally, 23% are in it for the protein, and 20% drink them for easy vegetable inclusion."

Of course Kashi has its own smoothie product, quite different from Fruitlove -- the Kashi Organic Breakfast Super Blend Smoothie Mix, meant to be mixed with milk.