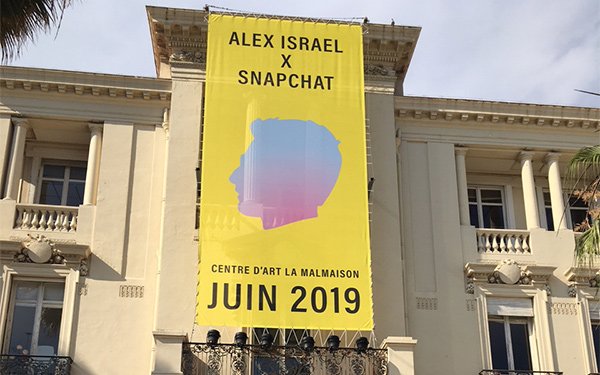 CANNES, FRANCE--For the past three years, Snapchat has bypassed the typical yacht, beach cabana or midnight concert in favor of celebrating its own brand of creativity.

Each activation has provoked mixed responses. There was the infamous Ferris wheel. Last year's sound collaboration with artist Christian Marclay was widely viewed as "too dark."

This year, the social media brand partnered with Los Angeles-based artist Alex Israel for a superficial, but totally-LA experience combining the physical with the digital.

Israel worked with Snap’s advanced augmented reality (AR) team to create five new AR experiences, each linked to one of his Self-Portrait paintings, giant-sized silhouettes of the artist himself.

The exhibition begins with Self-Portrait (Drive), a looping, psychedelic joyride through Israel and Snap’s home base: Los Angeles. The next stop tells visitors Israel's "Spirit Animal" is the "California Brown Pelican," before visitors move to a palm tree, gym, and the final Voicemail exhibit which has Israel leaving a message after a visual display of circuitry. The beginning and end serve as bookends to compliment the "digital drive." Snapchat gave complete creative control to Israel, who claims his inspiration is Hitchcock.

Outside the La Malmaison exhibition, Israel has applied Snap’s technology to repurpose the entire building as a pedestal for himself. Giant-sized and animated as a virtual sculpture, Israel's avatar sits cross-legged above the famed facade, scrolling through his phone and sending heart and happy-face Snapchat Stickers to passersby along La Croisette.