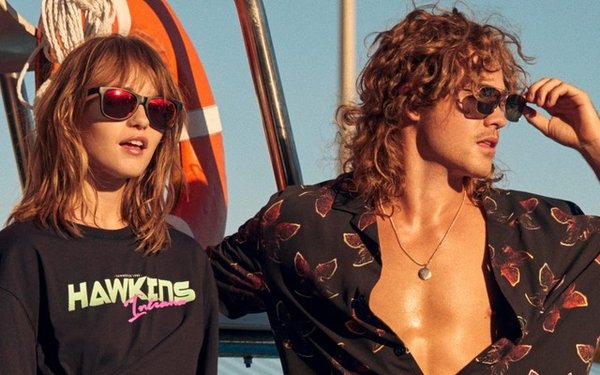 If you’re among the millions counting down the days to the July 4 release of the next season of “Stranger Things,” you’re not alone.

Brands like Nike, H&M, Hot Topic and Schwinn are way ahead of you, piling onto the franchise in hopes their merchandise survives the journey through the Upside Down.

Season 3 of the Netflix sci-fi horror series brings viewers back to Hawkins, Indiana, circa 1985, creating a natural connection for fashion brands eager to exploit the current craze for retro fashion.

H&M’s tie-in focuses on the kinds of tanks, shorts, playsuits and swimwear the kids might see around Hawkins’ community pool. The video ad for the retailer stars Dacre Montgomery, who plays series bad-apple Billy Hargrove. While there are splashes of fuchsia and teal, the retailer says most of the line sticks to the show’s black, red and white color palette. Some of the clothing appears in the series.

Schwinn is promoting its limited-edition of “Mike’s Bike” with a “Call now!” ad straight out of the Reagan era.

Not enough? Fans can swing by Walmart and score a Chia Pet that sprouts more curly locks for Dustin. And Netflix is further fueling fans’ craving for more Dustin, with the upcoming “Prank Encounters,” a show starring Gaten Matarazzo, using a hidden-camera format to spoof people through supernatural and spooky pranks, a sort of mash-up of “Punk’d” and “Stranger Things.”

Netflix is also doing plenty to hype the binge-frenzy, releasing a darker trailer for the new season that racked up 9 million views in several days. It recently announced it would introduce a “Stranger Things” free-to-play video game next year, developed with Finnish developer Next Games. Styled after 1980s Saturday morning cartoons, the game will incorporate Google Maps.