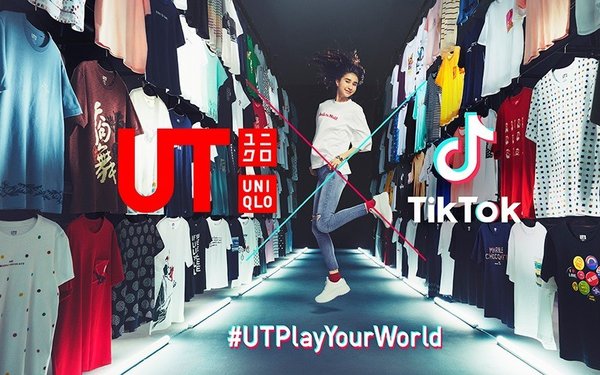 Uniqlo has a natural partner in the #TikTok social site, where youth rules.

It's a video promotion that's not on Instagram or Facebook, and not on YouTube or any other social site. Instead, funky retailer Uniqlo is launching its first multi-market media campaign with TikTok, the short-form video site where young people flock to make their own musical videos, among other things.

Your kids probably watch it. You probably don't.

The #UTPlayYourWorld campaign, which officially launches on Tuesday, asks users to share their homemade videos wearing clothes from Uniqlo's UT collection of t-shirts that play off pop culture figures and some oldies, including Mickey Mouse.

Uniqlo pitches the collection as a way for wearers to show their creativity, and the video reinforces the UT philosophy -- ”Wear Your World."

Contestants must be wearing a UT shirt from the spring/summer season and set their video to music from #UTPlayYourWorld, and can use TikTok graphic flourishes to dress it up even more. It is open to creators In the United States, France, Taiwan and Uniqlo's home base in Japan.

“We see a huge opportunity for brands to connect with today's generation and expand their reach by embracing the native, natural and creative form of content on TikTok,” said Masaki Nishida, vice president and Head of monetization for TikTok Japan, in a statement.

And what's the prize for winning this totally in-app marketing effort?

The winners (Uniqlo's rules make it clear there will be several) get their video played on Uniqlo's social media sites and in monitors in Uniqlo’s 2,000-plus stores worldwide. (About 50 of them are in the United States.) Winners will be announced July 12-19.

The promotion is a big splash for Uniqlo, which had about $16 billion in sales last year.

And it's a big deal for TikTok. The social site has exploded in popularity. Its Chinese parent bought Music.ly, a Shangai startup in 2017, and merged it with the new TicTok, which in just two years it has become one of the most downloaded apps in the world. Last year it set records for downloads on Apple, and in September, its downloads surpassed Facebook, YouTube, Snapchat and Instagram.

The users are young -- in the millennial demo and younger -- and that's a perfect match for Uniqlo that some have called “Gap for millennials.”