Showtime Portrait Of A Genius: Roger Ailes And The Rise Of Fox News 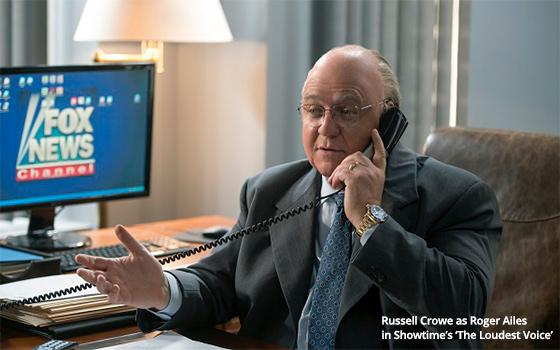 In Showtime’s long-awaited miniseries about Roger Ailes, he is portrayed as a media lion -- roaring one minute and speaking softly the next, while also begging, cursing, berating, cajoling and motivating colleagues and underlings.

In short, Showtime’s “The Loudest Voice” is the portrait of a genius. And like other geniuses throughout history, Ailes was flawed.

As portrayed here by Russell Crowe, Ailes could be temperamental, stubborn, vengeful and egotistical.

He possessed clearly sexist attitudes that were unfortunately de rigueur for many men in positions of power in most of the decades in which he honed his career as a television producer and then media consultant for presidential candidates.

His attitudes and behaviors toward women, such as his insistence that the female anchorwomen at Fox News Channel dress in skirts rather than pants so that their legs would be visible, are on ample display in this seven-part miniseries.

His oblique but suggestive hinting to some job applicants that granting him certain unspecified sexual favors would improve the likelihood of their being hired is also dramatized. Certainly, no miniseries about the life and career of Roger Ailes could accurately tell his story without including these ignoble incidents.

In “The Loudest Voice,” his penchant for lewd behavior lives side by side within the same complicated personality as his genius for envisioning a cable news channel that would address and reflect the political, cultural and social viewpoints of right-leaning Americans who Ailes felt were not served by any national television media at the time, the mid-1990s.

In pushing for the realization of his new idea for a news channel that would report the news, but also adopt a distinct political point of view in its lineup of prime-time talk shows, Ailes faced the same kind of pushback that innovators throughout history have always faced when they intend to change the status quo.

To counteract the naysayers within Rupert Murdoch's News Corp. (including sometimes Murdoch himself), Ailes had to adopt a tough, blunt-spoken, take-no-prisoners attitude. Predictably, some people disliked him intensely, while others remained loyal to him throughout his career.

The truth is that Roger Ailes did something that few people in the history of television ever succeeded in doing. He launched a new network from the ground up that adopted an attitude and point of view that had never been attempted before in the television business, and built it into a business that came to be worth billions and employed hundreds.

In the process, he gave voice to the viewpoints of millions of Americans who felt underserved (if not under-appreciated and totally disrespected) by virtually all other national news media.

For better or worse, the success of the news channel he invented spurred Fox’s competitors to slant their own content toward conformity with the viewpoints held by their own audiences, resulting in the Right vs. Left biases that today characterize all “news” coverage on cable TV, especially during prime-time hours.

There are many who consider Roger Ailes to have been some kind of Great Satan of cable news. But as this Showtime miniseries clearly demonstrates, the man was not a Satan but a genius who brought a passion to our national politics that had long been missing.