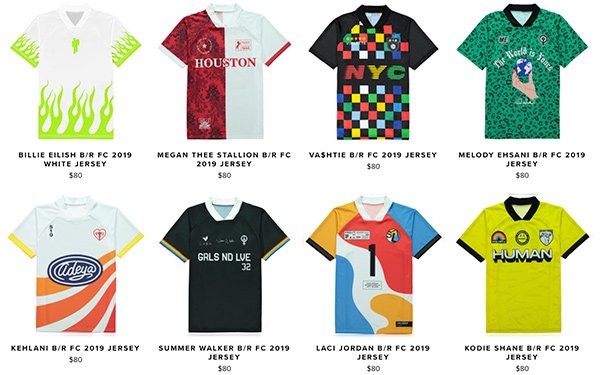 As the U.S. women’s national soccer team heads to the World Cup quarter finals this Friday, sports media site Bleacher Report has tapped female artists and singers like Billie Eilish and Kehlani to design an exclusive line of 16 different jerseys and T-shirts.

Bleacher Report has collaborated with celebrities like Dwyane Wade, Travis Scott and Nas on capsule retail collections this year, as the brand expands its ecommerce business.

The unisex collection around women's soccer features designs that illustrate equality and female empowerment, as well as other cultural graphics.

“Inspired by the women’s soccer team, I wanted to make a jersey that championed the feminine,” stated Ehsani, whose jersey features a hand with long, painted fingernails holding up a globe, with the words “The World is Yours." Above is the women's liberation movement logo.

Ehsani said she used the logo "to pay homage to all the women that paved the way for us up to this point."

"It’s my hope that whoever wears it feels empowered," she added.

Available on Bleacher Report’s app and online store, the jerseys run $80 and the T-shirts are $30.