Cottonelle Wipes Don't Clog Up Sewer Plants! How About Yours? 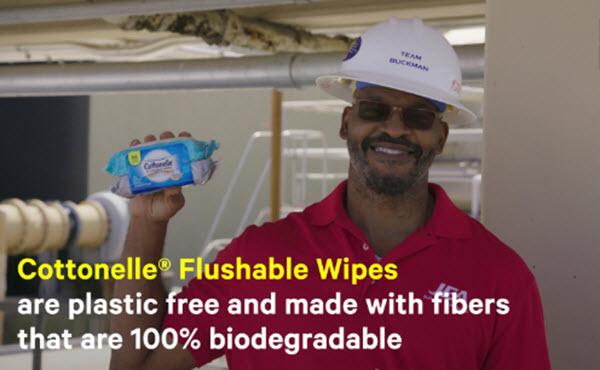 The makers of Cottonelle Flushable Wet Wipes would like people to know that their wipes are really, really flushable -- unlike most other ones on the market.

And as environmentally sensitive products are trending upward, it seems like a good time to get the message out.

To prove the point, Cottonelle's manufacturer, Kimberly-Clark, partnered with the company that operates 11 city water treatment plants in Jacksonville, Florida -- called JEA -- to study the wipes that make it into, and often clog, their system.

And after that study, JEA endorsed Cottonelle because the product degrades quickly and completely. It's the first product the JEA has ever endorsed, and conversely, it's the first wipe that has ever been endorsed by a wastewater company.

A video shows that the guys at the plant really want consumers to use Cottonelle.

Here is a statistic that might surprise you. In the Jacksonville water system, “baby wipes made up 37% of all material counted on average, with flushable wipes totaling less than 1%,” according to the report from the March 12-13 monitoring period.

“This study fully supports going forward with the partnership education program between JEA and KC [Kimberly-Clark] focused on a message of 'don't flush baby wipes'."

The study results in Jacksonville are consistent with a study conducted earlier in New York City.

Believe it or not, JEA's report says Kimberly-Clark purchased 80 common wipes brands from area stores at its Neenah, Wisconsin headquarters and supplied them to JEA so they could compare brands when they arrived through their sewers. Flushable wipes made up less than 1% of the total. There are detailed photos and statistics that delineate the differences between brands.

JEA's method of discovery, to some, may be a fascinating part of the report.

A series of videos explains what a bad time it is down in the sewers when consumers flush non-flushable wipes -- mainly because they don't rip or break down.

Kimberly-Clark says forensic studies have proven that wipes, or other products not designed to be flushed, make up the vast majority of clog-causing debris found in sewer systems.

And the videos demonstrate how Cottonelle's Flushable Wet Wipes rip up easily, the first step toward nothingness.

Those videos -- one is titled “The Monster In The Sewer” -- were shown on the NowThis news site and Cottonelle social sites. JEA distributed emails and made placements on its social media sites to spread the word.

The company also highlighted its partnership with Cottonelle at some area Publix supermarkets.

“Unfortunately, most wipes look the same,” says Ashley Abrahamson, the brand manager for Cottonelle. “To a consumer, a wipe is a wipe is a wipe. But even though they may look the same, they are all designed very differently. Until recently we haven't educated consumers that there is a correct wipe for toileting.”

And in fact, there is nothing new about Cottonelle.

But with heightened interest in sustainable products, this seemed like a good time to remind consumers that this product degrades nicely, and yet is strong enough to do the job.

Abrahamson acknowledges that advertising wipes is not easy, so using the scientific approach might make a difference. “People who are incorrectly using a baby wipe for toileting and then improperly flushing that are looking for that strength that a wipe provides them,” she says. “That is what we do, but we are designed to be flushed.”

Will the JEA test change behavior in Jacksonville? Perhaps -- but beyond that city, Cottonelle doesn't seem to be making a very hard push to get the word out nationwide, possibly because it is the best-selling wipes brand (competitors include Scott, Charmin’ and many private store-label brands). Its most recent “downtherecare” commercials don't make any reference to its biodegradable qualities.

It seems people do care, but are simultaneously ambivalent.

The company quotes research that concludes that 76% of consumers agree that using wet wipes with regular toilet paper is “worth it to feel extra clean.”

But Cottonelle's research also says that 46% of consumers are “concerned about wipes" clogging their plumbing system.

"Unfortunately, most wipes being used today are not designed to be flushed, but many users are flushing them anyway.”