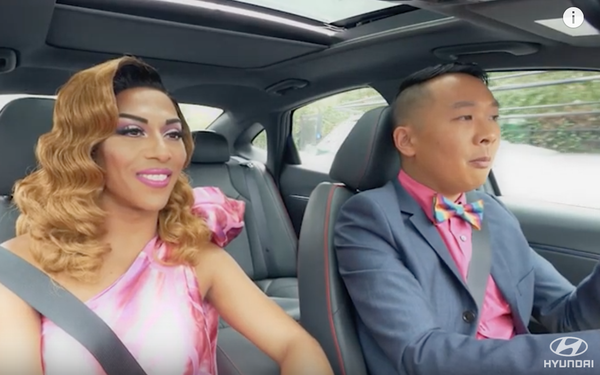 Hyundai Motor America is debuting an original branded-content series that gives voice to some of the best up-and-coming LGBTQ talent.

“OUT for Greatness presented by Hyundai” is launching in recognition of LGBTQ Pride month.

The film series will feature three episodes that bring together three burgeoning LGBTQ leaders with three up-and-coming filmmakers to create an experience of creative sharing, learning and mutual empowerment, according to the automaker.

The automaker aims to provide a platform for this growing group of artists, tastemakers and underrepresented talent across the country, says Hyundai Motor America CMO Dean Evans.

“Hyundai is a company that places a high value on diversity, and we stand together with the community to drive inclusivity and acceptance for all,” Evans says.

A few of the featured talents for this series include J. “Shangela” Pierce, an actor and performer best recognized as the only contestant to compete on three separate seasons of the Emmy-award winning reality series "RuPaul’s Drag Race," as well as appearing in the 2018 critically acclaimed film “A Star is Born.”

Jane Chika Oranika is a female rapper, best known for her viral freestyles, including an infamous verse over Kanye West’s "Jesus Walks."

Reggie Bullock is a professional basketball player currently finishing his sixth season in the NBA, whose professional life became entwined with social-justice activism after his older sister, Mia Henderson -- a transgender woman -- was killed in July 2014.

The first episode is available on Hyundai’s YouTube channel, with the other two rolling out over the next several weeks. The films will also be shown at Outfest Los Angeles in July and Newfest in October, events Hyundai also sponsors.

Hyundai has received a perfect score of 100 on the Human Rights Campaign’s Corporate Equality Index for the third consecutive year.