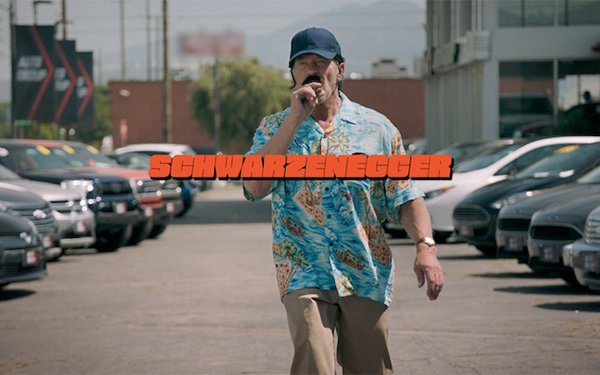 The "Kicking Gas" creative, in collaboration with Oak Productions and Bullitt, features Schwarzenegger going undercover at a car dealership by wearing a mustache and wig to convince potential buyers to purchase gas, not electric vehicles.

“I greened my fleet of personal cars, including my Hummers. And I challenged the auto industry to do the same," he says. "They now have the electric vehicle technology to out-compete gas-powered cars.”

Schwarzenegger was the obvious person for this spokesman role, thanks to his high-profile movie-star personality and his role as California Governor to enact historic clean transportation and clean energy initiatives, say Veloz executives.

He has no problem making fun of himself, notes Mary Nichols, who serves on the Veloz leadership team. “For some members of our unlikely coalition, this campaign is tricky and treads difficult territory. Change is hard. But everyone knows the future is electric, and California, for one, is committed to capturing the market advantage.”

The media buy is designed to mimic the launch of a summer blockbuster, with Schwarzenegger first teasing the debut via his social media channels. The campaign includes a 3-minute video, three 15-second spots, out of home, and social and display advertising—all centered on this Kicking Gas theme.

The Kicking Gas campaign is part of Veloz’s broader multimillion dollar “Electric For All” public awareness campaign to unite car manufacturers, utilities, clean air advocates, government and other stakeholders to promote these vehicles.

This is Superconductor's first major ad project, but serves to underscore its key point of differentiation from other agencies, explains Chris Adams, CCO, Superconductor. We sit at the "intersection of advertising and entertainment, so a campaign promoting electric cars with Arnold Schwarzenegger is exactly what we were built for."

The agency is also currently working with Hertz and Holoride, the partnership between Disney and Audi, for campaigns to be announced in the coming weeks.