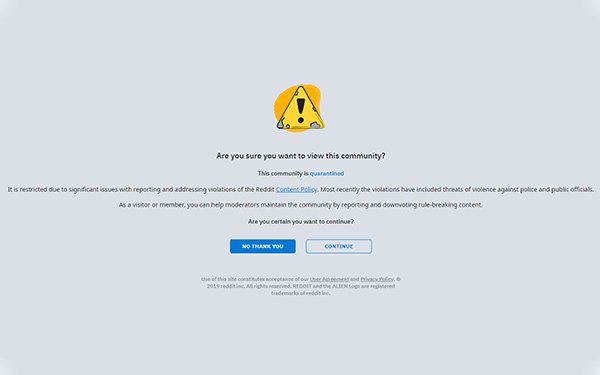 Reddit cracked down on an online forum that’s popular among supporters of President Trump, saying its users had broken rules against posting content that incites violence.

The social news aggregation site, which is an independent unit of Condé Nast’s parent company, Advance Publications, posted a warning that said The_Donald forum had been “quarantined.”

Reddit hosts about 140,000 forums called subreddits and has about 330 million monthly users, making it a top five website.

The quarantine requires users to opt-in to see content that many people may view as highly offensive or that promotes hoaxes. Subreddit moderators can appeal a quarantine, but must have a plan to change community moderation and enforce Reddit’s rules.

Reddit said some users of The_Donald subreddit, which has 750,000 members, had made violent threats against police officers and public officials in Oregon. The threats appeared amid a partisan fight in the state over a climate-change bill.

“Over the last few months, we have observed repeated rule-breaking behavior in your community and an overreliance on Reddit admins to manage users and remove posts that violate our content policy, including content that encourages or incites violence,” Reddit wrote in a message to The_Donald’s subredditors, as forum moderators are called.

Sublimeinslime, a subredditor of The_Donald, wrote in an email that the community’s moderators are working to have the quarantine lifted. They also criticized Reddit for not warning moderators before making the quarantine decision.

The_Donald gained a following during the 2016 election as a gathering place for fans of then-candidate Trump. He appeared in an Ask Me Anything (AMA) question-and-answer session on the subreddit, which also has hosted similar town hall meetings with conservative figures like Scott Adams, Tucker Carlson and Milo Yiannopoulos.

Reddit has a reputation for letting anonymous web users push the edges of free expression, but that has hampered its effort to show advertisers it provides a “brand-safe” environment for marketers.

This month, Reddit announced a collaboration with Oracle’s cloud-computing group to offer brand-safety controls around a real-time feed of user-generated content.

In the past, Reddit has implemented outright bans of subreddits promoting Nazism, white supremacy and other far-right ideologies. It also removed a forum about “incels,” a subculture of involuntary celibate men, because of threats of violence against women.

Some members of The_Donald accused Reddit of censorship and threatened to leave for another online forum. Others questioned the timing of the quarantine as Democratic presidential candidates convene for two nights of televised debates.

“The internet is being officially pasteurized, commercialized, politicized and soon will become a weapon against Americans much like China is using their social point program,” a Reddit user named Glassclose said.

Democracy depends on freedom of expression, healthy public debate and nonviolent civil disobedience, but calls to kill police officers and politicians undermine the noblest aspects of our political system. Such thuggery is more characteristic of dictatorships that violently oppress people or assassinate political opponents. In other words, in many countries where Reddit is banned entirely.