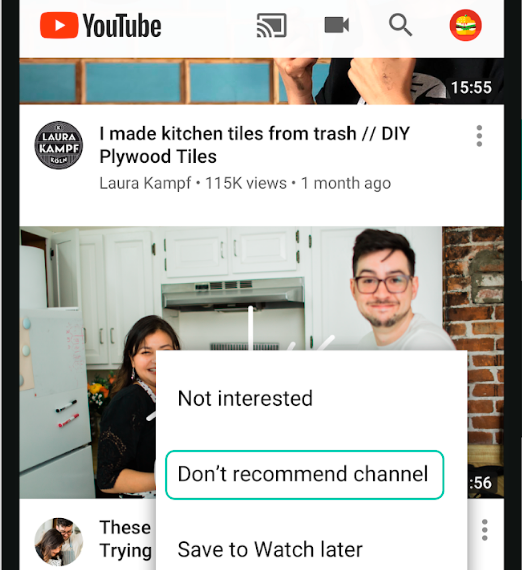 Following criticism of YouTube’s letting objectionable videos remain online, the platform announced that it is making it relatively easy for users to stop receiving video recommendations for specific channels.

Criticism about failing to remove extreme and misleading videos was fanned in part by a Bloomberg investigation, published in April, that concluded that Susan Wojcicki and other YouTube executives “were either unable or unwilling to act on internal warnings about extreme and misleading videos because they were too focused on increasing viewing time and other measures of engagement.”

All of which has served to intensify already rampant concerns about brand safety in digital platforms.

YouTube is taking some steps, though critics charge that it's a matter of too little, too late.

“One thing we’ve consistently heard from you is that you want more control over what videos appear on your homepage and in Up Next suggestions. So we're doing more to put you in the driver's seat,” YouTube Product Manager Essam El-Dardiry wrote in a blog post on Wednesday.

One new capability lets users stop suggestions for a channel by tapping the platform’s three-dot menu next to a video on the homepage or Up Next, then “Don’t recommend channel.”

Users may still be able to find videos from the channel if they subscribe, search for them, or visit the channel page or Trending tab.

The new feature is now available on the YouTube app for Android and iOS, and will be available on desktop soon, according to the post.

Bloomberg points out that recommendation control capabilities are already common on other video and music services.

YouTube is also adding more information about why it has suggested a particular video, in a box underneath the video.

“Our goal is to explain why these videos surface on your homepage in order to help you find videos from new channels you might like,” wrote El-Dardiry. That feature is live on the YouTube app for iOS, and will be available on Android and desktop soon, he reported.

Finally, YouTube is adding tools to explore topics and related videos on homepages and Up Next videos.

“The options that you see are based on your existing personalized suggestions and are meant to help you find what you're looking for faster,” El-Dardiry wrote.“They could be videos related to the one you’re watching, videos published by the channel you’re watching, or other topics which may be of interest to you.”

The tools are already available for signed-in uses in English on the Youtube app for Android, and will be available on iOS, destop and in other languages soon.