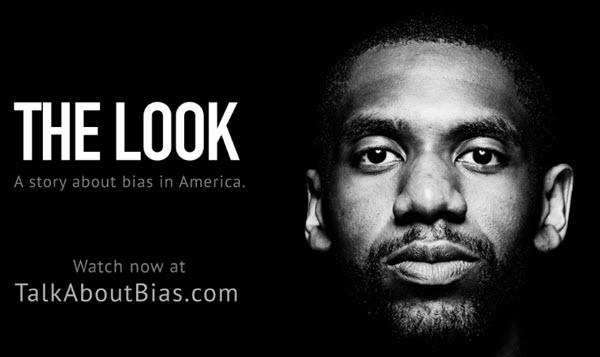 African-American people live in a different country than most other people, experiencing prejudice and suspicion in the most ordinary situations. That's the subject of a new short video, “The Look,” produced for Procter & Gamble, that lets viewers feel the same bias so many black men experience daily.

It went online Thursday, along with educational resources at www.talkaboutbias.com.

“The Look” watches as a black man suffers the silent bruises of prejudice.

Not one, not two, but three store clerks eye him as he shops. He races to an elevator and everybody stares straight at him as they let the door slam closed in his face. At a luncheonette, a couple comes in and obviously chooses to sit away from him. Whether conscious or not, this video suggests, black men see this every day.

The film, just one minute and 45 seconds long, ends with the line "Let’s talk about the look so we can see beyond it.”

“The Look” premiered last week at the Cannes Lions International Festival of Creativity, and at the BET Networks’ inaugural social impact conference in Los Angeles.

It's a companion piece, of sorts, to another P&G-funded film, “The Talk,” which shows how African-American mothers instruct their sons and daughters to ignore racial taunts and urge them to be super-careful around police if they are stopped while driving.

P&G partnered with a creative collective called Saturday Morning on the film and website.

The group was founded by ad executives who are trying to shift perceptions about bias and prejudice, and bring an awareness to people who don't feel the same slings and arrows. It was directed by Anthony Mandler of Stink Films with Malik Sayeed as director of photography.

“Empathy can be a particularly effective antidote to bias, and we created 'The Look' to change perspectives, prompt personal introspection, and bring people together for a conversation to ultimately change hearts and minds,” said Marc Pritchard, P&G’s chief brand officer, in a statement.

Earlier in June, a P&G-supported platform, My Black Is Beautiful, asked dictionary publishers to advise readers to capitalize “black” when referring to the race, as part of its effort to #RedefineBlack, so that black people are not lumped in with other phrases, like “black sheep” used to connote something negative. Dictionary.com agreed to make the change.

A Pew Research survey released in April says that 84% of black people feel prejudice coming from police and 70% feel it in the way they are treated in stores and restaurants. Fifty percent of black respondents say they think it's not too likely, or not at all likely, that African-Americans will eventually have equal rights. Only 7% of white respondents have that same grim outlook.