In Kintzer We Trust 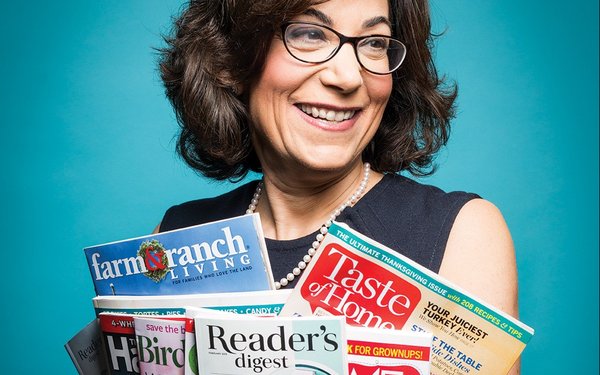 Few titles represent the Golden Age of magazine publishing more than Reader's Digest, so when its parent company changed its name from the namesake imprint to Trusted Media Brands in 2015, many in the industry saw it as the end of an era.

Four years later, it’s clear it has entered a new one, as the rebranding strategy conceived by company President-CEO Bonnie Kintzer is paying off.

Not just for Reader’s Digest, but the company’s entire portfolio of special interest publications -- including Taste of Home and Family Handyman -- too. Digital ad revenues are expanding, and the company is diversifying into direct-to-consumer products and membership programs.

It’s quite a turnaround from when Kintzer took over the company following a series of bankruptcy filings. Since then, Trusted Media Brands Inc. has eliminated $1.8 billion of debt and grown its digital revenues 61%.

Kintzer achieved this mainly by monetizing digital content and creating new products for the publisher’s audiences. Her first order of business, she says, was rebuilding the sites, to expand ad inventory and publishing tools.

We “wanted to know what consumers buy from us,” she explains, adding Trusted Media Brands began working with data management platform Krux (now Salesforce DMP) in order to market more directly to its readers and identify new marketing trends and opportunities.

In 2019, digital ad sales grew grew 36% across its owned-and-operated sites, with a big boost coming from programmatic sales, which expanded 47%.

The strategy for 2019 has been to focus on identifying digital consumer products to grow Trusted Media's audience and monetization opportunities.

Members pay $179 a year to access DIY project plans, online classes and its network of experts, to learn tasks like building a shed or installing a kitchen backsplash. Members also get a monthly newsletter and a year’s subscription to the print magazine.

Family Handyman’s DIY University is an example of another new digital offering. It hosts a variety of online courses for home projects, ranging in price and difficulty.

Taste of Home also is “expanding into lifestyle, gadgets and growing commerce,” Kintzer explains, noting the publication recently launched Taste of Home Roast, a small batch coffee subscription service. Three roasts were chosen by Taste of Home’s Test Kitchen team and branded by the magazine. Consumers pay about $15 a month (plus shipping and processing fees) for a bag of coffee delivered to their homes.

Kintzer, a marketing guru who rejoined the company from CEO of her own consultancy -- Women’s Marketing Inc. -- previously worked for the company for nine years through 2007, most recently as president of U.S. publishing. There, she led the launch of Ever Day with Rachel Ray.

Errico is developing a new product every month or so, Kintzer notes, adding the company focuses on “what [consumers] want and need,” and most importantly, are willing to “pay for.”

New verticals often get market tested through newsletters. Trusted Media Brands has 20 newsletters based on special interests. It recently created Bakeable to leverage its endemic audience of bakers.

“We won’t charge initially” for these verticals, Kintzer says, adding the initial strategy is simply to build a “community.”

The team gauges interest from newsletter topics and uses its first-party data to inform the consumer products it develops.

The newsletters also lean on feedback from the internal network of millennials that work at Trusted Media Brands. They share their opinions on revenue-generating projects and on-boarding, Kintzer adds.

It has since released studies on the modern American family and current trends in home behavior, which are regarded as essential insights by some of its advertising partners.

Those geographic skews drive much of its content and product development.

Recipes for Taste of Home, for example, are created with ingredients that are easy to find for home cooks. The Test Kitchen team uses appliances made by companies like GE, rather than high-end, fancier brands, to mimic what a reader would be using at home.

Family Handyman’s most searched phrase is “repair toilet.” Such insights drive the brand toward practical and useful information to readers’ lives.

That knowledge enables the company to counter-program mainstream media, bypassing issues like politics in favor of “positive” content, such as humor or stories that evoke optimism.

“Bite-sized,” emotional stories fare well online, Kintzer says, adding this creates an opportunity for distributing its content via other publishers in search of similar fare. For example, Reader’s Digest has a large syndication business, including publishers such as Yahoo that relish its “G-rated” content.

“We are not the first with a new shiny tool,” Kintzer concedes, but notes her trend-watching strategy is paying off by incubating new products that service its loyal readers.

“We’re not trying to be the first-mover,” says Kintzer, “but [we are] a swift follower.”