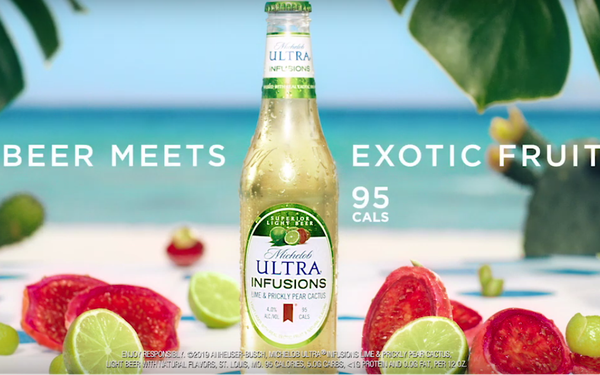 The commercial is titled “Summer, Meet Your Beer” from FCB Chicago, but the beer was actually introduced in March. It could be hanging around long after summer ends.

Ultra is the rare domestic label actually gaining in popularity. Beer Marketer’s Insights recently predicted that Michelob Ultra will pass Budweiser as the fourth most popular beer in the U.S.

Last year during the NFL season, Bud sales were down 7.2% and Bud Light was down 8.6%,  while Ultra sales rose 11.6%, according to Morgan Stanley data.

Anheuser-Busch InBev CEO Carlos Brito said the company wants to push consumers to higher-priced beers like Michelob Ultra and is open to lots of new varieties, while noting that some will thrive while others will bomb.

It’s an old story by now that craft beers are eating into old-line domestic brands, and more and more  young drinkers are avoiding beer altogether.

But in April, Budweiser introduced its Discovery Reserve American Red Lager to celebrate the 50th anniversary of the moon landing — a brew that includes a “hint of toffee.”  And Bud Light makes Lime-a-Rita, a beer/tequila/lime concoction.

Last year Budweiser also introduced its Freedom Reserve Red Lager, brewed with “toasted barley grainsfor a slightly sweet aroma with a touch of hops, a rich caramel malt taste, and a smooth finish with a hint of molasses.” Budweiser said it was “inspired by George Washington's recipe.”