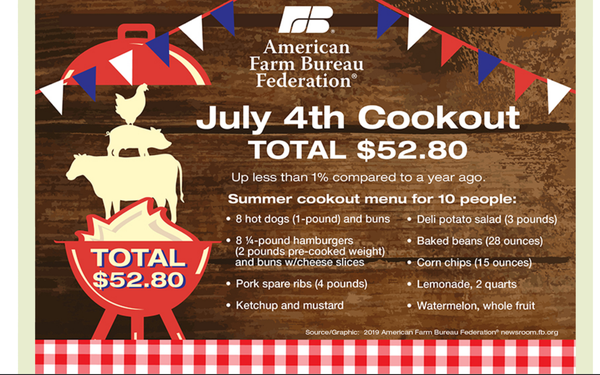 Let’s say that last year you planned the July 4 picnic for the family and the next-door neighbors.  And let’s say those 10 people had such a swell time they asked you to do it again and serve the exact same thing: hot dogs, cheeseburgers, pork spare ribs, potato salad, baked beans, lemonade and watermelon.

Well, the good news is that people like your picnic menu!

And the not-very-bad news is that, according to the American Farm Bureau’s informal survey of prices, the average cost of a summer cookout for 10 people this year, calculated at $52.80, is up just 11 cents from a year ago.

So eat up, America.

The Farm Bureau tracked the average cost of 1.5 quarts of vanilla ice cream at $3.58, which brings the cookout price to $56.38, still under $6 per person.  (An informal scan of prices couldn’t find an ant spray that wouldn’t spiral the price far beyond $60. Maybe next year.)

The Farm Bureau had 114  members in 34 states serve as volunteer shoppers checking retail prices of those picnic items, just as it does before Thanksgiving.

The stable prices are a reflection of some facts of life farmers may not be so crazy about.

“Pork production in 2019 continues to increase compared to year-ago levels. Increased supplies and competition in the meat case at the grocery contributed to lower spare rib prices,” said the Farm Bureau’s chief economist, Dr. John Newton, in a statement. And, the bureau notes, with milk production at a record high this year, and cheese production also increasing, the cheese for those burgers ought to be cheap.

But life for a farmer is not quite the picnic it once was. “Through the mid-1970s, farmers received about one-third of consumer food expenditures for food eaten at home and away from home,” Newtown said.

But he said that based on the Agriculture Department figures, farmers in 2017 received a little less than 15 cents per food marketing dollar -- and after taking the cost of production into the equation, farmers netted 7.8 cents per farm dollar earned.

The lack of much change in the marketplace survey correlates to the Consumer Price Index, too, which has stayed relatively flat.

The picnic the Farm Bureau priced out may not relate that closely to what some Americans are intending to spend for Independence Day fare.

The National Retail Federation’s study, based on a survey of 7,200 adults, says 62% of them are planning a cookout or picnic, spending an average of $75.35. And that’s per person, not for a party of ten.