Got Bones? Skateboarders Tout 'Nature's Energy Drink' For Milk Board 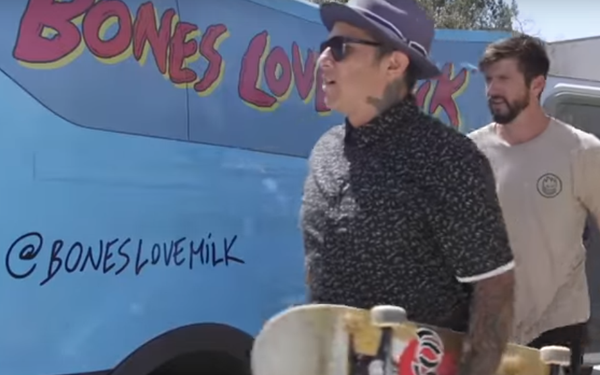 The California Milk Processor Board is rolling out some of the best-known youth skateboarders in a campaign aimed at convincing teens and tweens that milk is “nature’s energy drink.”

The new brand initiative is based on CMPB’s view that skateboarders are the ultimate risk takers: flirting dangerously with the laws of physics and, quite often, falling down in the process. The birthplace of skate culture, California is home to more than 1.6 million skateboarders, 70% of whom are under 18, according to the CMPB.

Crafted by the GALLEGOS United agency, “Bones Love Milk” won’t be supported by a traditional advertising campaign. Instead, it will rely largely on micro-influencers, social media and a dedicated website.

Front and center in these efforts will be the Bones Love Milk Skate Team featuring some of the sport’s best-known enthusiasts, including Christian Hosoi, Chris Cole, Tom Asta, Bryce Wettstein and Cordano Russell.

“Milk holds a longstanding history of communicating to moms,” CMPB Executive Director Steve James tells Marketing Daily. “We needed an idea beyond traditional advertising to stand out and connect with this skeptical and hard-to-reach audience. This idea has to convince them to grab a glass of cold milk instead of just any drink. We recognize that this starts with connecting with these kids’ role models through their passion points.”

In addition to the backing of skateboarding influencers, the initiative aims to educate youths about how milk represents a natural source of nutrients that help support peak performance. “What you put in your body translates to your performance on the board so refuel with some Milk after your next session,” states the website.

The CMPB’s venerable "Got Milk?" campaign originated in 1993. Created by Goodby Silverstein & Partners, the ads would typically feature celebs with milk moustaches or people frustrated by their lack of milk to help wash down dry or sticky foods.