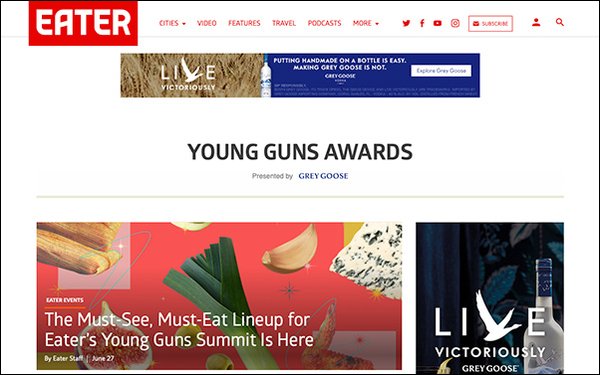 Vodka company Grey Goose is sponsoring an editorial franchise for Vox Media's Eater around upcoming talent in the food and restaurant industries.

Called Eater Young Guns, the 8-year-old franchise is expanding with Grey Goose’s support to a day-long summit and a dedicated section on the site for Young Guns related content, produced independently by Eater’s editorial.

About a dozen people are chosen each year from across the U.S. for Eater’s Young Guns Awards, which highlight “not just chefs and cooks,” but also those that work in the front or back of house, or people who make beer or chocolate, Eater’s editor-in-chief Amanda Kludt told Publishers Daily.

Those on the list range from 23-year-old vegan cafe owner Francesca Chaney in Brooklyn to 32-year-old butcher Jason Chow in Chicago to Annie Kamin, a 28-year-old chocolatier in San Francisco.

“We name [the Young Guns] at such an exciting moment in their career, one in which they are seizing new opportunities and building their brands,” Kludt said.

While Young Guns has had sponsorships in the past and Eater usually throws a party for those that receive the award, Grey Goose’s backing will help the franchise expand.

“We wanted to change things this year and go a little deeper — have a whole day of programming to try to push the conversation forward,” Kludt said.

The event will host conversations, panels and workshops. The Young Guns can “show off their skills and teach our attendees a few things,” she said. “There will be more one-on-one time with editors and the talent we are trying to highlight.”

It was important to Kludt to ensure the tickets were accessible to Eater’s readers. It costs $60 for all-day access to the food, drinks and agenda at 25 Kent in Williamsburg, Brooklyn.

Kludt expects about 700 people to attend the event on July 27.

Chef Marcus Samuelsson will make the keynote speech, while other food-industry talent like Alison Roman, Ruby Tandoh, Martha Hoover, Preeti Mistri and Mike Solomonov will take part in the summit. (Samuelssen and Eater have a show on PBS called “No Passport Required.”)

Grey Goose will throw a cocktail party and a DIY mixing station, where one of the "Young Guns" will create their own drinks.

“Just as the ethos of our new brand platform, Live Victoriously, encourages consumers to celebrate life’s big and small moments as lifelong memories in the making, Young Guns is celebrating the victories of the next generation of culinary stars, and the steps they’ve taken to get there,” said Adrian Parker, vice president of digital at Grey Goose.

Grey Goose is also sponsoring two videos, created by Eater’s in-house creative team. Each video focuses on a Young Gun as they prepare a dinner for loved ones and discuss what it took for them to get to where they are.