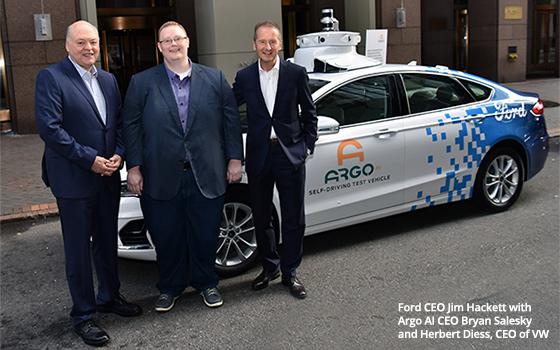 The cost of developing self-driving cars keeps going up.

This means it’s getting tougher for most companies to go it alone.

The latest in the pooling-of-resources trend is a $2.6 billion investment Volkswagen is making in Argo AI, the Ford-backed autonomous driving startup.

The two-year-old startup is now valued at a whopping $7 billion.

The investment comprises $1 billion in funding and VW contributing to the venture its Autonomous Intelligent Driving company, valued at $1.6 billion, according to Bryan Salesky, CEO and co-founder of Argo AI.

“Our agreement with Volkswagen positions us as a technology platform company, expands the potential geography for deployment and will further fuel our product development,” Salesky states in a blog post. “We’re the first self-driving company with definitive deployment plans in both the United States and Europe.”

Ford previously invested $1 billion in Pittsburgh-based Argo AI, which is expected to expand from 200 to 700 employees.

This is not the first instance of companies teaming to tackle autonomous vehicles.

Meanwhile, General Motors, Honda and Cruise are working together to develop autonomous vehicles, with Honda committing $2 billion to the venture.

In the Argo AI venture, Volkswagen brings to the table significant experience with electric vehicles with Ford contributing its know-how in scale and previous work on autonomous vehicles.

While time will tell whether any of the joint ventures succeed, plenty of money will spent along the way.