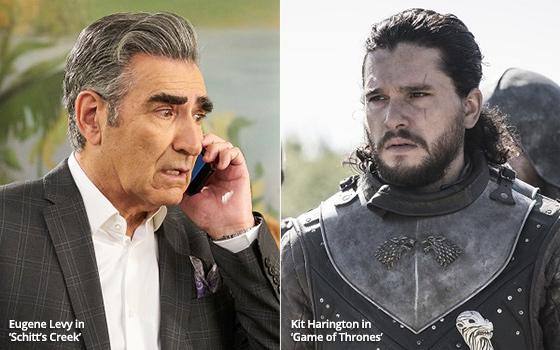 From "Schitt's Creek" to "Winterfell," TV today covers a lot of ground.

“Schitt’s Creek” is the comedy series on the CBS-owned Pop network. It stars Eugene Levy (above left), who was nominated this week for a Best Actor (in a comedy) Emmy award. The show’s female lead, Catherine O’Hara, was also nominated.

In another fictional land far, far away, Kit Harington (above right) was nominated for a Best Actor (drama) Emmy for “Game of Thrones.” It was one of 32 nominations for “GOT,” which was this year's top single nominee among all the shows nominated.

In fact, 32 nominations in a single year is a new record for a single show. The old record was 27 for “NYPD Blue” in 1994. In eight seasons, “Game of Thrones” has earned 161 Emmy nominations.

That total is an indication of how important the show was for HBO in the race for Emmy nomination supremacy in television. Will HBO see its like ever again? Not any time soon.

Also contributing to HBO's total this year were the miniseries “Chernobyl” with 19 nominations and the Bill Hader comedy “Barry” with 17.

This year's motherlode of nominations for “Game of Thrones” helped HBO take back the top spot as TV's most nominated network — or platform, or streamer, or content provider -- none of which are better words than “network,” in the TV Blog's humble opinion.

In last summer's nominations, Netflix surpassed HBO for the first time by a nomination tally of 112 to 108, respectively. This year's tallies are 137 for HBO and 117 for Netflix. Take that, Netflix!

The third-place network was not even close -- 58 nominations for NBC, down from a 2018 tally of 78 (not that 58 nominations is altogether a bad thing).

Two others saw enormous growth in Emmy nominations, however. Prime Video (which ought to have “Amazon” affixed to its name somewhere) has 47 nominations this year, up from 22 last summer. And AMC has 11 nominations, up from just one in 2018.

Among the most-honored shows on this year’s Emmy nomination list -- and a significant contributor to NBC’s 58-nomination tally -- was “Saturday Night Live” with 18.

Thus, so far in this TV Blog, we have managed to mention Emmy nominees from a wide variety of program categories and platforms: Comedies on Pop and HBO ("Schitt's Creek" and "Barry"), an epic drama of international proportions ("Game of Thrones" on HBO), a sprawling nature documentary series ("Our Planet" on Netflix), two miniseries about real events ("When They See Us" and "Chernobyl"), a critically acclaimed spinoff (“Better Call Saul”), a period drama about a plucky New York housewife ("The Marvelous Mrs. Maisel") and a sketch-comedy show that is one of the oldest shows still on television -- 44 seasons ("SNL").

While this represents a good start, TV's wide variety of content, as reflected in this week's Emmy nominations, cannot be encompassed in the space allotted to this blog.

Whether or not one actually likes what TV offers on all of its platforms, it is at least reasonable to view TV today as a large tent with room for all.

For example, a James Corden special in which the host of “The Late Late Show” on CBS took a singing car ride with Paul McCartney was an Emmy nominee this week. Also in the CBS family, reboots/sequels of old classics were also nominated for Emmys -- “Star Trek: Discovery” and “The Twilight Zone,” both seen exclusively on CBS All Access, the SVOD service.

The PDF document anyone can download from Emmys.com that lists this year's newly announced nominees -- encompassing scores of shows, categories, performers and all manner of production or “craft” functions -- goes on for 65 pages.

Certainly, the vast majority of these awards will not be awarded on television when this year’s Emmy show -- the 71st annual Emmys -- airs live on Fox on Sunday, September 22.