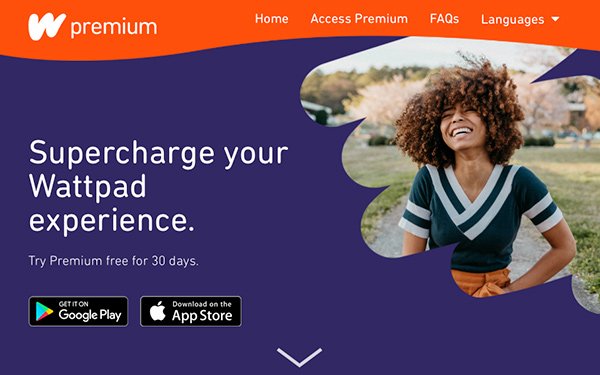 The user-generated storytelling platform's business is primarily supported by digital advertising and branded content. Brands can sponsor a writing prompt for a competition or a story on a Wattpad reading list.

Wattpad Premium charges users $5.99 a month (or $4.99 with an annual subscription) for a subscription that unlocks an ad-free site; users can read without interruption. Subscribers also get exclusive theme colors to personalize their experience on Wattpad.

There are currently more than 150 stories available for purchase. Users can pay for chapters or full stories.

Wattpad says its users have read more than 5.5 million minutes of Wattpad Paid Stories in the past month alone.
This program also means writers can now earn money for their work on Wattpad, from other users.

“Every decision we make at Wattpad supports both our business and our writers,” Jeanne Lam, general manager at Wattpad, told Publishers Daily.

The programs give users "more control over their Wattpad experience, while creating a new path to monetization for our writers.”

First tested in select countries, the two offerings are now available to Wattpad’s global community of over 70 million users.
The two programs also work in tandem.

Wattpad Premium subscribers receive bonus Coins (up to 66% more free Coins) with every purchase of any Wattpad Coin package and can unlock more Paid Stories.

Wattpad Premium initially launched in 2017 to English-language countries, rolling out to select regions throughout 2018 and 2019.

The Wattpad Paid Stories program was in beta last fall in the U.S., Canada, Mexico, Great Britain and the Philippines.
Wattpad added additional English and Spanish-language regions earlier this year.