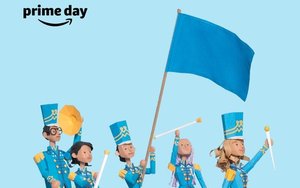 Amazon, naturally, is triumphantly proclaiming that its fifth annual Prime Day wasn’t just big, but the biggest sales day in its history. But as metrics filter in from across the omnichannel universe, it turns out other retailers should be buying Amazon a beer for generating a 68% lift in their sales.

Adobe Digital Insights says that among the largest retailers — those with $1 billion or more in annual sales — revenues climbed 54% on Monday, and 72% on Tuesday, for a combined gain of 68%. And small-to-medium sized retailers found themselves with a 28% bump.

And retailers with physical stores — a channel Amazon still can’t compete in — did well too, registering a 12% in shoppers buying online and picking items up in stores.

Amazon says Prime members snapped up some 175 million items during the 48-hour festival of deals, with combined sales surpassing the previous Black Friday and Cyber Monday combined, and shoppers saving more than $1 billion. And Prime Day was the best-selling event ever for Amazon devices, especially Echo Dot and Fire TV Sticks.

Consumers also wanted to smarten up their homes, with the iRobot Roomba 690 Robot Vacuum, MyQ Smart Garage Door Opener and Amazon Smart Plug all doing well. And twice as many people purchased Ring and Blink devices as compared to last year’s Prime Day.

Chain Store Age, citing data from Jumpshot Inc., says that Gap, Nike, BestBuy, and Macy’s saw the largest gains in sales. The pub reports that both Gap.com and Nike.com experienced gains of about 150% compared to a typical Monday, beating Amazon’s increase of 70%. Some lost out, though, with Jumpshot noting declines at websites for Walmart’s Jet, Ikea, Home Depot, Etsy and Wayfair.