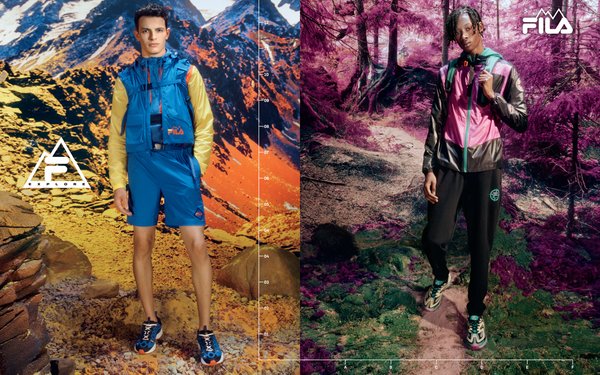 Fila is introducing a new limited-edition apparel, accessories and footwear collection for men and women, Fila Explore, inspired by nature, exploration and adventure.

It is supported by a campaign that includes a three-week pop-up in SoHo, starting July 26. Print breaks July 23 in August issues of Vogue and GQ. Digital ads begin July 26, timed to the opening of the pop-up, says Fila North America Executive Creative Director John Lin.

“With Fila Explore, our goal was to create a 360-campaign that leverages all channels for cohesive storytelling, including print, digital, social, out-of-home and within the Explore pop-up space,” Lin tells Marketing Daily. “We tailored our campaign content for each of these touch points.”

The campaign was shot with Spring Studios, under the direction of the Fila marketing team.

“We took an abstract, elevated approach, with storytelling that also resonates with the growing trend in outdoor-wear fashion and the early adopters of that trend,” Lin says. “The Explore product was styled to look like found objects in a surreal landscape, as if our modern explorers suddenly came upon them during their journey.”

Outlets within the media buy also include Complex, Highsnobiety and Gear Patrol. There will be additional ads across Instagram, Facebook and Twitter, as well as an out-of-home component that will feature wildposting (placing many posters in an urban area) in 34 locations throughout Manhattan and Brooklyn. The campaign will also extend to  participating Fila partners across the globe, including Korea, Japan, China, U.K., Brazil, Greece and India.

The collection is broken down into four distinct categories inspired by nature and natural territories: canyon, woods, mountains and elements, Lin says.

“These zones are utilized as a common thread across all aspects of the Fila Explore initiative and each has their own distinctive color palette,” he says.

The Explore Pop-Up shop, open to the public July 26-Aug 11 at 428 Broadway, will serve as an interactive locale for shoppers to discover their own sense of adventure and engage with the brand, Lin says.