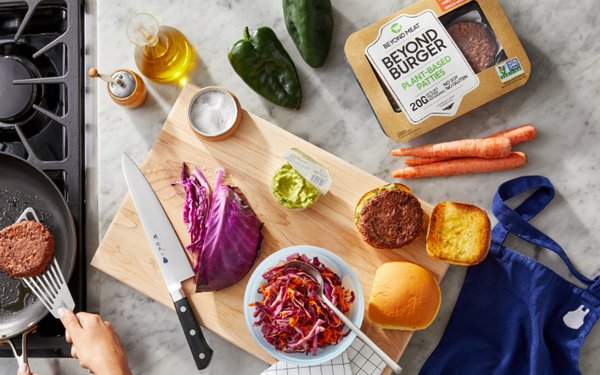 There’s a lot of consumer experimentation around plant-based burger substitutes at restaurants — but so far the classic meat burger is taking the heat pretty well.

The NPD Group set out to determine, among other things, if veggie burgers are closing in on beef burgers or if the growth of plant-based burgers corresponds to an increase in vegetarianism or veganism.

The bottom line, at least for now: As more plant-based products become available, people are willing to try them. Beef burger buyers, who purchased them at QSRs an average of 18 times in the year ending April 2019, did give plant-based burgers a try, purchasing them at QSRs two times in the period, according to NPD.

Another way to look at it is that 95% of plant-based buyers have made a beef burger purchase within the past year.

“Plant-based burgers allow consumers to substitute without sacrifice. They get the ‘burger’ experience while assuaging their need for more protein [without meat] and [their] social concerns,” says Darren Seifer, NPD food and beverage industry analyst. “With that said, U.S. consumers have not given up on beef burgers but are willing to mix things up every now and then.”

So what role are vegetarians and vegans playing in the rise of plant-based foods? They still represent just a single-digit percentage of the U.S. adult population, but NPD says 18% of adults want more plant-based foods in their diets. Moreover, 60% of adults want to ingest more protein -- but some of them have concerns about things like animal welfare and how meat products reach the market.

Next month, Blue Apron will add Beyond Meat’s Beyond Burger to its menu -- a decision based on customer desire, the company says.  “We know a growing number of customers are interested in plant-based proteins, whether as an alternative to meat, a desire to explore a new ingredient, or an opportunity to make more sustainable food choices,” says Blue Apron CEO Linda Kozlowski.