Stella Artois MIght Take You For Ride On Cool Speedboat 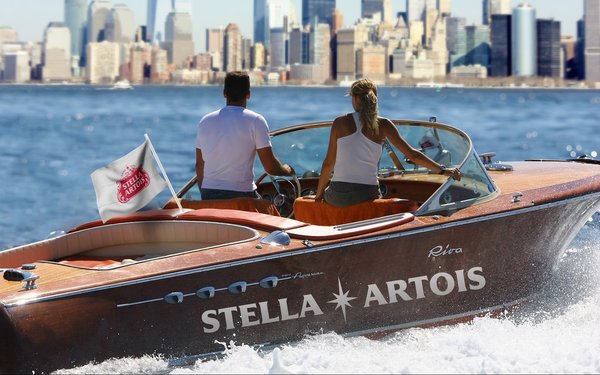 New York has been experiencing a heat wave.  And just in time -- or maybe a week late -- the Stella Artois brand is launching its own flotilla of speedboats that will carry passengers from Pier 25 on New York’s West Side to the Brooklyn Marina, from July 30 through August 2.

But you have to sign up to get a chance -- and in a city of 8.6 million, your chances are slim. The four boats can accommodate  four to six passengers each, or a total of  128 passengers a day, says Lara Krug, a vice president for Anheuser-Busch brand Stella Artois.

Consumers can start trying on Tuesday at noon  when a special website starts taking entries.

The event is part of the Stella Artois “Summer Like You’re On Vacation” promotion that includes a New York City-centric ad starring actor Idris Elba showing how even life in the big city can be like a day at the beach. “Why wait for a week on the French Riviera when I can spend the whole summer right here on the Hudson Riviera?” Elba asks.

The summer cruising fits that theme. Riders will climb aboard what appear to be chic 60s-era Riva vessels that put the speed in speedboats when they roamed just offshore from the Boulevard de la Croisette in Cannes.

(But, Krug tells Marketing Daily, three out of four of the boats that will cruise the Hudson and East rivers are actually old Chris-Crafts. That’s not quite deceptive advertising.  It seems Riva more or less copied Chris-Craft’s mahogany look, though Caros Riva’s version was more luxe and far faster.)

These boats are “classic treasures,” Krug says, that have been “refurbished by their respective owners. The boats are originals, not replicas.”

Timing is everything  -- and while Stella Artois missed last week’s sweltering weather, more sweltering is surely in store. Statistically, August is just as hot as July in New York, with both months averaging a high of 84 and a low of 69.

Krug sees the summer as a perfect time to “upgrade New Yorkers’ daily commute.”  Of course summer is always the best month for beer, and Krug points to figures from the IRI research firm that report weekly summer beer consumption last year was 20% higher than the rest of the year.

Stella Artois is no stranger to New York waterways. In 2016, its logo adorned the sail of one of the tall ships that floated along the river.