Debating Dems Getting 2-Night Showcase On CNN This Week 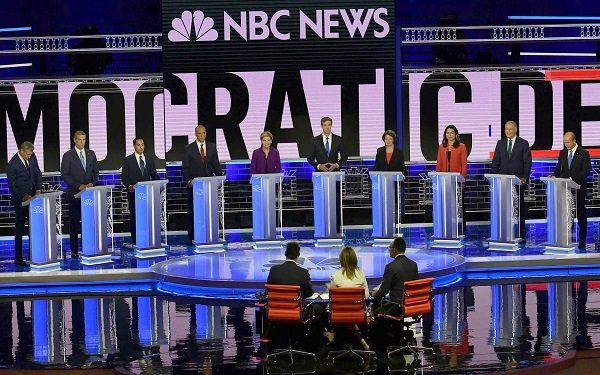 Twenty Democratic presidential hopefuls are scheduled to take the stage at Detroit’s Fox Theatre for two nights of debates this week that will hopefully begin the process of winnowing down an unwieldy crowd of candidates.

This two-night face-off figures to be the TV highlight of the week -- particularly since most of the TV world is smack in the middle of the summer doldrums. For the TV news channels at least, these debates will provide plenty to talk about, and take up untold hours of airtime far beyond their four total hours in length.

At 20 participants -- 10 facing off on each evening -- this week’s debate field is the same size as the last ones on June 28 and 29 in Miami, staged by NBC News (pictured above).

Incredibly, the lineup has only one change. Just one candidate threw in the towel after last month’s debates: little-known California Rep. Eric Swalwell. He has been replaced by Montana Gov. Steve Bullock.

This week’s political event is all CNN’s. The two debates are scheduled to run from 8 p.m. to 10 p.m. Eastern on Tuesday (July 30) and Wednesday (July 31). They will air live, moderated by Dana Bash, Don Lemon and Jake Tapper (whose last name was misspelled as “Taper” on CNN’s own website on Monday).

While all but one of the participants are the same, the lineups have undergone a handful of changes that will pit some candidates against each other for the first time. For example, in last month’s go-round, Sens. Sanders and Warren were seen on separate evenings. This week, they’ll go head to head.

Also new this week, the debates’ two most notable outliers -- non-politicians Williamson and Yang -- have been separated over the two evenings. Last time, they both appeared on night two.

One pairing that has not been separated this time around: Sen. Harris going up against former Vice President Biden. Her confrontation with Biden over his long-ago opposition to a school busing bill was one of the most talked-about moments of the last debate.

Harris’ strategy, in which she sought to portray Biden as sympathetic to segregationists in his first years as a United States senator, was cheered by some and criticized by others. Viewers will tune in to see whether she will attack him again this week.

Enjoy these crowded field debates while you can. It is widely assumed that there will not be 20 candidates in the next round of debates scheduled for two nights in September on ABC. Among other things, the qualifications for inclusion will be stricter.

To qualify for September’s debate, “candidates need at least 2% support in four polls, and 130,000 unique donors (with at least 400 donors each in 20 states) to qualify,” according to Vox.com.

And, although ABC and the Democratic National Committee at present are setting aside two nights for the September debate (the 12th and 13th), only one night might be necessary. Various experts and pollsters say there will be substantially fewer candidates who will qualify by then. The most likely to still be standing, Vox says, are: Biden, Sanders, Warren, Harris, Buttigieg, O’Rourke, Klobuchar and Booker.