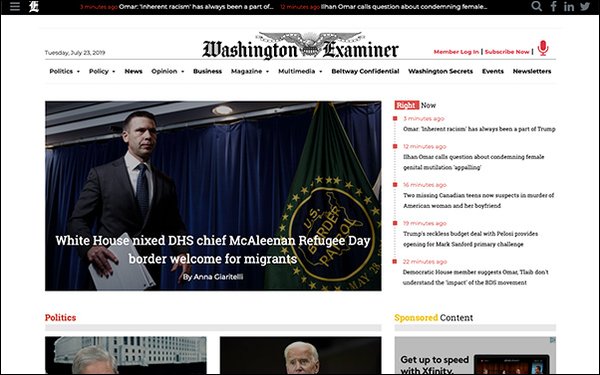 The Washington Examiner doubled its traffic from June 2018 to June of this year, from 5 million to 10 million unique visitors.

The Examiner ranked as the second-most-trafficked conservative website in June for the fifth consecutive month, behind Foxnews.com.

“While Foxnews.com lags CNN.com by a substantial amount of traffic, it continues to surpass mainstream media sites," like The Washington Post and The New York Times, according to TheRighting.

RedState also doubled its traffic year-over-year, with 1.4 million unique visitors in June 2019, up 126%.

The Examiner first overtook TheBlaze as the second-most-trafficked U.S. conservative site  in March.

Hugo Gurdon, editor-in-chief at the Washington Examiner, told Publishers Daily at the time that growth was mainly attributable to the site publishing more stories, with more reporters breaking exclusive news.

"We're forthright about our conservative worldview, we give conservative people and ideas a fair hearing … But at the same time, we report news straight, so people need to read us even if they disagree with us," he said.

TheBlaze.com posted its eighth consecutive month of year-over-year increases in unique visitors. It ranked as the fourth-most-trafficked conservative website in June.