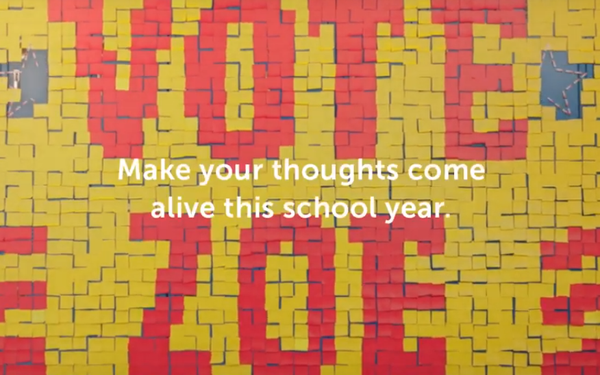 Exactly how do you “Think Loud”?

According to the latest campaign from 3M’s Post-it brand, you write ideas on those sticky little notes -- and good things start happening.

“Think Loud”’s 15-second spots aimed at the back-to-school market, which broke on Monday, are aimed at showing the “power in writing it down,” according to the company.  “When ideas are captured on Post-it Notes, they become real.”

So, in one ad, an unseen someone posts notes saying ”Practice” on a piece of sheet music, and the scene morphs into a shot featuring violin music and many instruments, with columns of Post-its rising and falling with the music.

Another ad repeats the pattern of multicolored Post-its becoming graphic elements in the scene. So the message “Run for president,” pasted on a calendar in a school locker, switches to a red and yellow campaign poster made up of Post-its, with the message “Vote Zoe.”

“Make your thoughts come alive this school year" is the tagline at the end.

Those two spots are timed to the back-to-school season, but others have more adult themes, like one where the Post-it message is “Launch a start-up.”

The first campaign spots are running on cable networks viewed by both parents and students, including HGTV, DIY Network, Food Channel, Discovery Channel and Nickelodeon, with buys including Shark Week, MLB Baseball and "House Hunters."

Internationally, the spots will begin airing in Canada and Mexico in Q3 of 2019, with Europe, Australia, Japan and Korea added in 2020

The campaign was developed with global consumer insights from seven key countries “to set the stage for a more consistent and emotional brand story on a global scale,” according to the company.