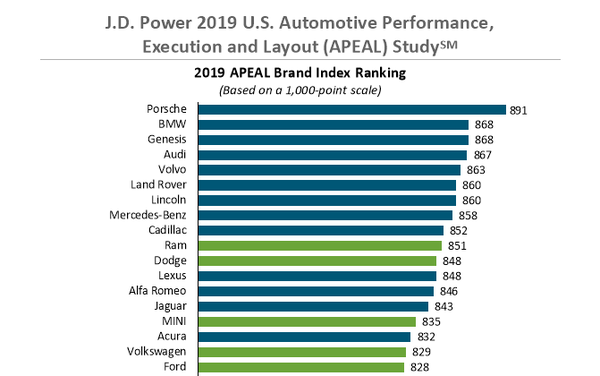 The study examines 10 vehicle categories, all of which have improved in appeal from 2018. Categories showing the most improvement are infotainment (+10 points) and visibility and safety (+6).

One big trend the study found: The satisfaction gap between cars and SUVs is shrinking. Cars continue to outperform SUVs for fuel economy and engine/transmission, largely because of the obvious: Cars are lighter than SUVs. However, SUVs gain the advantage in most other areas, including driving dynamics; storage and space; visibility and safety; and seats.

Also, “owners have higher satisfaction if their vehicle is equipped with safety features such as blind spot monitor, collision avoidance and lane departure warning,” said Dave Sargent, vice president of global automotive at J.D. Power. “This should serve as a positive sign for manufacturers, as these features are some of the early building blocks for fully automated vehicles.”

The study, now in its 24th year, is based on responses gathered from February 2019 through May 2019 from nearly 68,000 purchasers and lessees of 2019 model-year vehicles who were surveyed after 90 days of ownership.