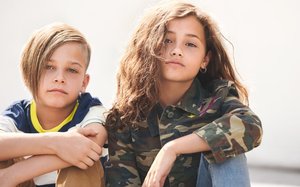 Gap, fighting hard to regain its relevance with American shoppers, is introducing “Forward,” a back-to-school campaign that celebrates rule-breaking and self-expression.

Kicking off with a video set to the original "Sweet Child O' Mine" from Guns N' Roses, the company says the idea behind the effort is to encourage kids “to push forward into a world of their own creation.”

Separately, Gap announced a president for its Old Navy spinoff.

“Forward” stars real kids with real talent, including a 13-year-old electric guitarist, a 12-year-old bassist and a seven-year-old pianist.

The San Francisco-based company describes the media spending behind the effort as “significant” and says the ads are running on mobile, social, video and digital.

The new campaign comes at a challenging time for Gap Inc. Earlier this year, amid miserable first-quarter results, it announced plans to spin off Old Navy into a separate public company. And in its most recent quarterly results, it turned in more disappointing numbers, amounting to a 2% decrease in net sales to $3.7 billion.

The decline was relatively slight at Old Navy, down 1%, and more troubling at Banana Republic, which eased down 3%. But the fall at the Gap was painful, at 10%.

In reporting those results, the company reaffirmed its commitment to the spinoff. “This quarter was extremely challenging, and we are not at all satisfied with our results,” stated Art Peck, president and CEO, in its announcement. “We are committed to improving our execution and performance this year. We remain confident in our plan to separate into two independently traded public companies in 2020, and we are focused on setting up both companies for long term value creation and profitable growth.”

This week, the retailer revealed more about those plans, announcing additional leadership for Old Navy. It is tapping Nancy Green as president and chief creative officer. Green currently heads up Athleta, Gap’s small-but-growing fitness brand. She will head to marketing, design and production, and report to Sonia Syngal, Old Navy’s CEO.