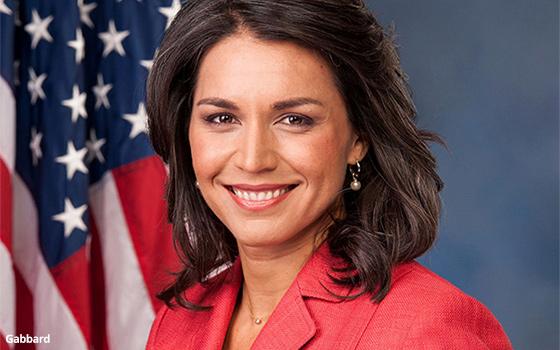 “Google’s arbitrary and capricious treatment of Gabbard’s campaign should raise concerns for policymakers everywhere about the company’s ability to use its dominance to impact political discourse, in a way that interferes with the upcoming 2020 presidential election,” lawyers for her campaign allege in a complaint filed Thursday in U.S. District Court for the Central District of California.

Her complaint alleges that Google violates the First Amendment as well as various California laws.

“Google has established a clear trend of using its power over speech to favor certain political viewpoints over others,” the complaint alleges. “In this case, Google has sought to silence Tulsi Gabbard, a presidential candidate who has vocally called for greater regulation and oversight of (you guessed it) Google. But this could happen to any candidate running in any election.”

Gabbard alleges that her account was suspended for several hours on June 28 -- two days after she participated in a debate with other Democratic hopefuls.

"For hours, as millions of Americans searched Google for information about Tulsi, and as Tulsi was trying, through Google, to speak to them, her Google Ads account was arbitrarily and forcibly taken offline," her complaint states.

Google says its automated anti-fraud systems can suspend accounts due to unusual activity. “Our system triggered a suspension and the account was reinstated shortly thereafter,” a company spokesperson says.

The spokesperson adds that Google's political ad products operate "without bias toward any party or political ideology."

Gabbard also alleges Google treats email from her campaign as spam “at a disproportionately high rate.”

The complaint doesn't specify what percentage of her email is marked as spam, or why she believes that figure is higher than for other candidates.

Her suit comes as Google, and other tech companies, are facing increasing scrutiny over how they treat content. Earlier this month, Sens. Ted Cruz (R-Texas) and Josh Hawley (R-Missouri) urged the Federal Trade Commission to investigate alleged “censorship” by Silicon Valley.

“By controlling the content we see, these companies are powerful enough to -- at the very least -- sway elections,” the lawmakers wrote. “Companies that are this big and that have the potential to threaten democracy this much should not be allowed to curate content entirely without any transparency.”

Gabbard's complaint highlights her criticisms of Google, but she's hardly the only candidate to call for a crackdown on Silicon Valley. Sen. Elizabeth Warren (D-Massachusetts), also a presidential candidate, has advocated breaking up the largest tech companies, while Sen. Bernie Sanders (I-Vermont) said he would try to break up Facebook, Google and Amazon.

“If Google were to be biased against every politician who speaks out about Google, there would be no political ads,” he says.

What's more, he says, Google has a First Amendment right to make editorial decisions -- including decisions about advertising.

In fact, numerous judges have thrown out lawsuits by people or organizations who have accused Google, Twitter and Facebook of “censorship.”