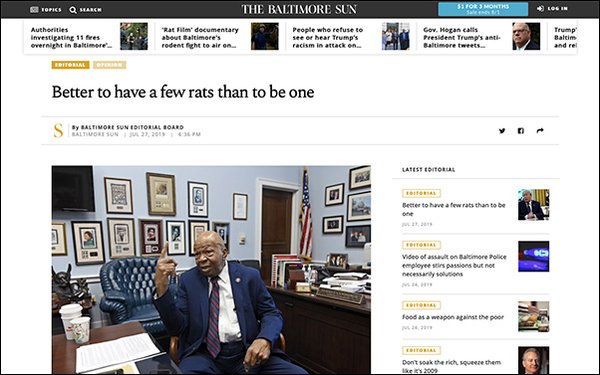 An editorial from the daily newspaper Baltimore Sun condemning President Trump’s tweets about the Maryland city led to record traffic and subscription sign-ups over the weekend.

“No human being would want to live there,” Trump declared, accusing Cummings’ district of corruption.

That evening, Baltimore Sun’s editorial board shot back: "Better to have a few rats than to be one."

Cummings “has been a thorn in this president’s side, and Mr. Trump sees attacking African American members of Congress as good politics, as it both warms the cockles of the white supremacists who love him and causes so many of the thoughtful people who don’t to scream,” the Sun’s editorial board wrote.

The piece drew attention around the world.

Sun spokeswoman Renee Mutchnik told The Washington Post on Sunday that traffic to baltimoresun.com and new subscribers were double what is typical on a Saturday for the paper, owned by Tribune Publishing.

Subscription orders are on track to hit quadruple of what TheBaltimore Sun receives on a normal Sunday, The Post added.

Publishers like The New York Times and Vanity Fair have experienced a similar phenomenon, often referred to as a “Trump bump,” or a surge in readership spurred by the news fervor around the president and his administration.

In 2017, The Timesreported digital advertising revenue increased 23%, thanks to a “Trump bump.”

This was the highest number of subscriptions sold in a single day at Condé Nast.