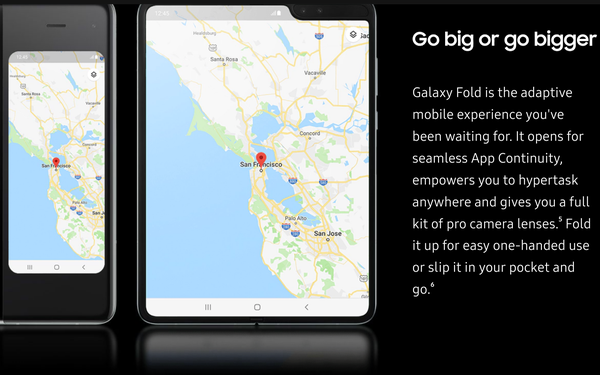 Maybe good things happen to those who wait -- Samsung must hope so. In April the company hurriedly called off plans to introduce its ballyhooed Samsung Galaxy Fold phone because of problems found at the eleventh hour.

Now it’s going to try again. It has announced  the Fold will be coming, for real this time, in September.

Bad public relations -- as might happen when you cancel a product introduction -- is still better than the disastrous public relations Samsung could have faced for introducing a phone priced at $1,980 with many issues.

(Samsung previously learned this lesson in 2016: Its new Galaxy 6 phones turned out to have a tendency to burst into flames. The company pulled them off the market.)

“All of us at Samsung appreciate the support and patience we’ve received from Galaxy fans all over the world,” the company said in its new announcement. “Galaxy Fold is a device long in the making, and we’re proud to share it with the world and look forward to bringing it to consumers.”

As its name suggests, the Fold unfolds — but more aptly, it opens up like a book. If you imagine the front of a smartphone as the 4.6 inch cover of a book, the larger 7.3 inch screen is the page inside. The smaller screen is for ordinary use, like phone calls or small graphic displays.  The big one is for the video consumers increasingly use their smartphones to watch.

Tragically, also from a public relations standpoint, journalists discovered one of the big flaws when some of them received the phones to test-drive. The Fold's big screen came with a thin plastic shield over it, and many of the testers tore it off.

But that plastic cover, which looked like the same protective sheet you rip off a conventional smartphone, was meant to stay on. When it was removed the phone malfunctioned. Some tech reviewers were amazed at all the problems they found.

Samsung said it has now improved the product since it pulled away from the original introduction -- including solving for other issues.

The new Fold has “additional reinforcements” to protect the screen from external particles but still allow it to fold. Samsung also strengthened the hinges and added metal layers to protect the screen and reduced the space between the hinge and the body of the phone so the thin screen divide looks thinner still.

Best of all, it seems, “the top protective layer “ some journalists tore off has now been extended, “making it apparent that it is an integral part of the display structure and not meant to be removed.” (Journalists were reportedly told not to remove the plastic, so this fix appears to make it exceedingly clear, even to tech reporters.)

Patrick Holland, a reporter for CNET, blamed the tech journalism culture for creating a climate that made Samsung push the product too fast before knowing all the flaws it had.  He also suggested that Apple in March was so encouraged to market  its new AirPower wireless charging mat, it almost did so before the product was ready. (As with the Fold, its launch has been pulled back.)

“Samsung and Apple are ultimately responsible for the products they make, but we must share some of the blame for participating in a culture where Samsung felt it needed to push the Galaxy Fold out before it was absolutely ready for consumers. Not every product is going to be the ‘next iPhone’ ” Holland wrote in a piece titled “Samsung Overhyped the Galaxy Fold But It’s Our Fault It Was Delayed.”