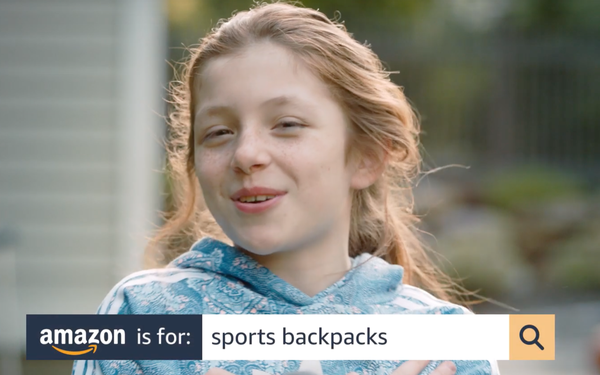 Parents aren’t the only ones looking forward to the first day of school. This year, Amazon, Walmart and Macy’s are focusing on the anticipatory glee of opening bell, when all things are possible: making the soccer team, asking someone to the dance or learning how to draw a self-portrait.

Amazon’s ads celebrate a Happy School Year, focusing on all the gear kids need to write on that clean slate.

Amazon previewed one of the ads during the Prime Day Concert livestream, a spokesperson tells Marketing Daily, with other spots starting to air this week.

She says the theme will also be fully integrated throughout the site, with “an event page, Amazon App traffic drivers, influencer amplification and social extensions.”

It marks the company’s second back-to-school campaign, and was created entirely in-house.

Walmart, meanwhile, has taken that old “Go big or go home” adage to heart, with a campaign called “Big Day Back.” In these spots, kids’ Walmart purchases transform them into skyscraper-tall giants as they stride back toward school with the confidence of the titans. (It helps that Fitz and the Tantrums is sending them off with”I Just Wanna Shine.”)

Macy’s, too, is celebrating that “All Brand New” feeling with an energetic spot that shows off more dance moves — and animated renegade rollerblading — than one middle school can handle.

Meanwhile, Target is hitting the gas on its Drive Up! offerings, just in time for the BTS push. The retailer says it’s expanded delivery of items ordered through its app, which an associate will hand-deliver to purchasers’ cars in two minutes or less after arrival in a designated parking spot.

The new service is now available for the first time in Maine, Massachusetts, New Hampshire and Rhode Island, and will be expanding to parts of New York, Pennsylvania and Connecticut.