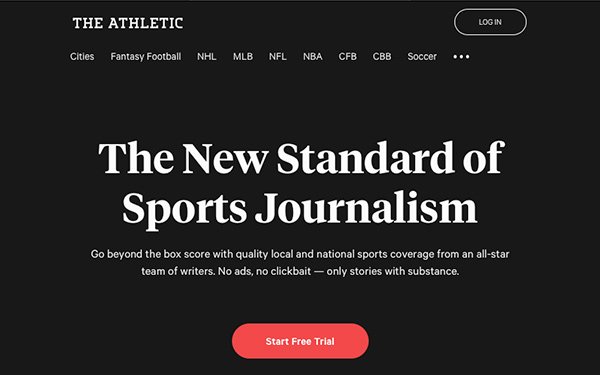 Sports-news subscription service The Athletic is reporting a major milestone: It has reached more than 500,000 subscribers, and expects to reach 1 million by year’s end, reports Bloomberg.

The site was launched in Chicago in 2016 by cofounders Alex Mather and Adam Hansmann and attracted 300,000 subscribers last year. It now has 47 local news markets.

Though the company is not yet profitable, Bloomberg reports many of the individual news markets are profitable. The Athletic provides both national and local sports coverage.

Its ad-free, online-only network collects around $64 per subscriber, Mather told Bloomberg. Many readers sign up during promotional drives. Subscriptions cost $10 a month or $60 a year.

As it collects more subscribers, The Athletic continues to expand.

This spring, the pub launched 20 podcasts exclusive to subscribers, covering the NBA, NHL, NFL, MLB and fantasy sports. Fifteen of the podcasts focus on local sports in the Bay Area and Toronto.

The ad-free podcasts are produced by a team of 12 new hires, including hosts, producers, engineers and audio specialists. The Athletic also announced it was hiring 14 staffers as it expanded coverage into the WNBA.

The Athletic covers sports in nearly 50 cities across the U.S. and Canada and 270 teams across the NFL, NBA, MLB, NHL and college sports.

According to Bloomberg, The Athletic also plans to expand into coverage of English Premier League soccer teams this summer.

The site has raised more than $90 million in venture-backed funding that includes Founders Fund and Comcast Venture as investors.

Last fall, The Athletic announced a round of Series C funding that reached $40 million. The new injection of cash was slated for expansion of video and podcast teams.

The Athletic is estimated to be worth $200 million.