Fox's 'Beverly Hills 90210' Reunion Is For Diehard Fans Only 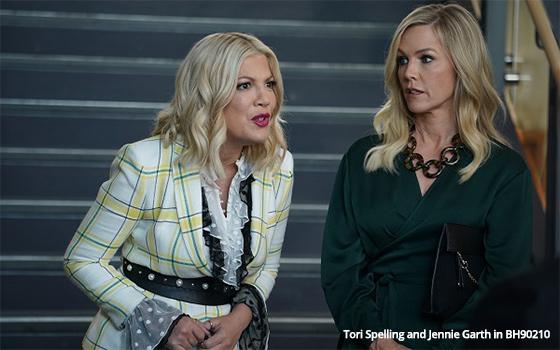 If this summer's “Beverly Hills 90210” reunion series demonstrates anything, it is that time moves much too quickly.

Running for the virtual entirety of the 1990s, “Beverly Hills 90210” was a quintessential part of the television viewing experience in that decade.

The show was about a group of teens living in the now-famous Beverly Hills zip code. But only four of the eight were teenagers when the show premiered -- Tori Spelling and Brian Austin Green, both 17, Jennie Garth, 18, and Shannen Doherty, 19.

Today, as this six-part reunion series called “BH90210” prepares to premiere Wednesday night on Fox, two of the show’s original stars have aged out of the demo -- Ian Ziering, 55, and Gabrielle Carteris, 58 (she was 29, and playing a teen, when the show premiered).

Suddenly, the teens from “90210” are middle-aged and beyond. It does happen quickly, doesn’t it? One minute, you're a young adult in your 20s enjoying “Beverly Hills 90210” and seemingly in the blink of an eye, you look in the mirror and you are not you. You are your parents.

Having these thoughts is part of the experience of watching this “Beverly Hills 90210” reunion series. Another category of reactions are the ones related to reunions in general. Does anyone really like these occasional get-togethers with aging former classmates?

In this reunion series, the awkwardness and discomfort associated with reuniting with, in this case, former co-workers is shrewdly and effectively rendered. In the show, seven original cast members play themselves -- the six mentioned above plus Jason Priestley, 49. Luke Perry unfortunately died last March at age 52, just when this reunion series was being announced.

In this week's premiere episode, the surviving cast members are reuniting -- with various degrees of reluctance -- to participate in an onstage “panel” event at some sort of fan convention. They all see each other for the first time in many years at an airport to which they have all flown from disparate locations.

On this show, this reunion of former cast mates is a fictional one, as opposed to more traditional TV-show reunion specials going back years in which the original stars of a show such as, say, “The Andy Griffith Show,” appeared in real reunion settings.

These would include a simple stage, or a re-creation of an original set where they would reminisce, swap stories and look at clips.

In those reunions, everyone always had the utmost respect and affection for each other -- or at the very least, they made sure to act like it. In “BH90210,” however, various cast members look forward to this reunion with dread because they evidently do not regard certain former co-stars with any affection at all.

Apparently, as this six-episode limited series goes on, an effort will be underway to enlist these seven cast members in a scheme to reunite them in a new updated “90210” in which they would star, presumably, as their aged original characters.

But for the purposes of this review, the TV Blog watched only the first episode, and that only about two-thirds through when the online screener Fox provided decided not to function anymore.

Back when the old “90210” was on TV, TV critics received this show and others on VHS cassettes, which were bulky but reliable in a quirky, non-digital way. Yes, the times they have a-changed.

As for the qualities of “BH90210,” it is recommended overwhelmingly for fans of the original show.

Anyone else will likely find it more or less impenetrable or at least devoid of interest.