Accent Is On Action In British 'Bulletproof' On The CW 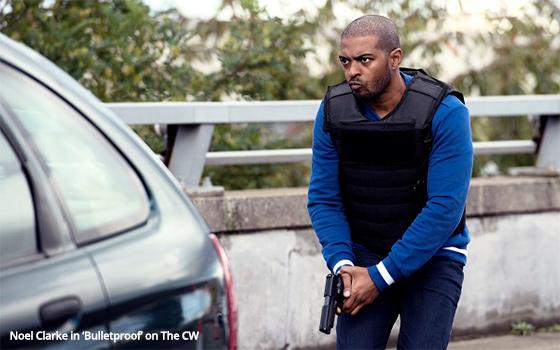 Although the exact wording of the famous quotation is in dispute, George Bernard Shaw is credited with the observation that “Britain and America are two nations divided by a common language.”

This statement can certainly be applied to television when American networks seek to fill and refresh their content offerings with British imports.

The language itself is not necessarily the issue. We can easily get over the various words the Brits use for everyday things such as trucks (lorries), bathrooms (the loo), elevators (lifts) and fried potatoes (chips).

But it is the variety of British accents, not the words they use, that can present an obstacle to enjoyment. Here at home, we sometimes hilariously turn up the volume on British shows, as if making them louder will make some heavy British accents easier to understand. More often than not, this does not work.

The subject arises with the arrival of a buddy-cop show brought in from the U.K. to take up residence Wednesday night on The CW's summer schedule. The show is called “Bulletproof,” and it first aired in England in spring 2018.

It is a not a bad show, if one's tastes run to American buddy-cop movies such as the “Lethal Weapon” and “Bad Boys” series. Like those movies, this show has its two gung-ho protagonists always ready to quip their way to victory in the face of great danger.

The self-confidence these TV and movie police partners always exhibit does require a viewer to suspend disbelief. Sometimes, you cannot help thinking: Of course, they are confident they will emerge from this confrontation unscathed -- they are the stars of the show (or movie).

Moreover, all of the action is fake, and they have no chance of really being hurt, so they may as well just carelessly joke the night away even under withering fire from automatic weapons.

On the British-accent scale, the two buddies of “Bulletproof” start out strongly -- which is to say, their accents are so strong that understanding their repartee is difficult, if not impossible.

From a lifetime of watching British TV shows on American television, I have certainly observed that England boasts a number of distinctive regional styles when it comes to accents. I cannot identify any of them, however.

Whatever accent the cops are using in “Bulletproof,” it somehow becomes more comprehensible as the premiere episode proceeds, which makes their rapid-fire conversations easier to understand.

In the show, the two cops are on the trail of a murderous gang from Serbia who steal luxury cars to peddle to their countrymen back home. Take a wild guess who wins this contest of law vs. order.

One of the conceits that seems to always attend the arrival of British TV shows in America is the assumption that these shows are always finer in some way than American TV shows. The more I watch British TV shows, however, the more I have come to the conclusion that British TV produces great, mediocre and bad TV shows in the same proportion as we Americans do.

As cop shows go, “Bulletproof” is run of the mill.

“Bulletproof” premieres Wednesday night at 8 Eastern on The CW.