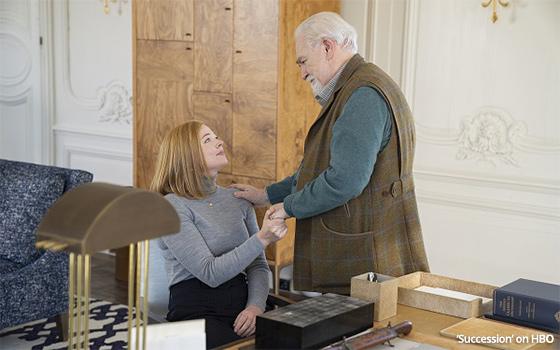 The best feature of “Succession,” HBO’s drama series about a faux-Murdochian family whose patriarch runs a swashbuckling media company, is watching the man who plays that patriarch, Brian Cox.

His portrayal of this fictional media-industry autocrat -- a Scot named Logan Roy -- is one of the standout performances to be currently seen on TV.

Roy and the rest of his scheming family return for a second season of “Succession” starting this coming Sunday night HBO. As the season begins, the family media empire, Waystar Royco -- described at the start of the series last year as the world's fifth-largest global media conglomerate -- is fending off a hostile takeover attempt.

In response, Logan has called his grown children together to his sprawling summer mansion in order to conspire together on a plot aimed at keeping the company in the family.

The problem is, everybody knows that the only person who really has any say in the matter is the patriarch, Logan -- who habitually plays them one against the other. So the plan they come up with is really his, and his alone.

While “Succession” is most assuredly a work of fiction, the similarities to the Murdoch dynasty are undeniable. Most of them are embodied in the Brian Cox character, who is almost certainly inspired by Rupert Murdoch.

As one of the last of the family-owned media conglomerates, the pressure is on to sell the company to a powerful tech giant that is intent on swallowing Waystar Royco.

In the season premiere this Sunday, Roy's long-time banker spells out the challenges to Logan posed by his company's decidedly old-fashioned way of doing things.

Among other assets, the company still clings to a chain of newspapers. It also happens to run a powerful cable news channel that is a particular favorite of the proprietor because it gives him influence in American as well as global politics.

But as the banker points out, holding onto these assets will sink the company in just a few short years. But the wily patriarch -- although aging and ailing -- believes he can outsmart the tech companies.

Meanwhile, here in the real world, the real Rupert Murdoch sold some of the most valuable assets of his Fox empire to Disney. And AT&T absorbed Time Warner. The second season of “Succession” is nothing if not timely.

The second season of “Succession” premieres Sunday night at 9 Eastern on HBO.