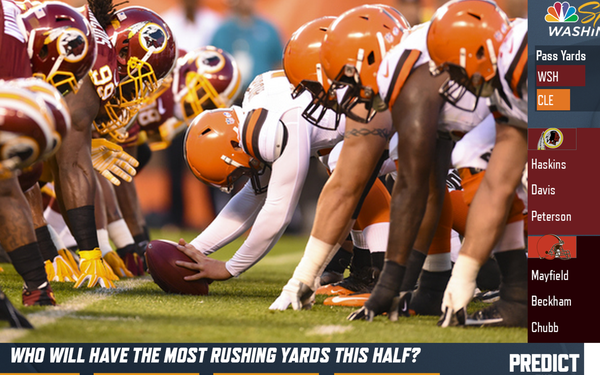 The local Washington, D.C. telecast of Thursday’s pre-season NFL game between the hometown Redskins and the Cleveland Browns will allow viewers to participate in “interactive, predictive-gaming” -- in other words, betting -- on certain aspects of the game. Winners get prizes of $1,000 per quarter.

Though that’s not like all the full-fledged opportunities to win (or lose) at a casino, it is a step by the NFL toward participating in legalized gambling.

The major sports leagues have been careful about that, mindful of past game-fixing scandals.

Still, betting increases interest in the games -- and other barriers to sports betting are slipping away. As of now, 42 states have legalized sports betting or are about to, because of a Supreme Court ruling last year that lifted the federal ban on sports betting.

The NFL contest, called  “Predict the Game,” lets fans try to predict various game events or player performances: How many touchdowns will the quarterback throw? Who will have the most tackles?

It’s not betting, Las Vegas style, because the viewers aren’t putting money behind their guesses, which will be based on multiple choice options. But fans can win money.

Viewers can also watch the game on Washington’s WRC-TV without being bothered by “Predict the Game.”  To participate, viewers have to go to an NBC sub-channel. Once there, fans will see the same telecast enhanced by graphics displaying statistics and betting odds throughout the game.

Fans will be invited to create an account and make their guesses at the TV station’s website.

"This partnership strategically aligns with our organization’s commitment to constant innovation for our fans,” said Scott Shepherd, the Redskins’  senior vice president.

Though the sports betting aspect has news-making interest, it also may be a way to keep fans marginally interested in pre-season games, which are test runs for new or marginal players. The top stars play briefly, if at all, and by the fourth quarter the games can be a viewing challenge, even for diehard fans.

Nielsen ratings for last year’s pre-season NFL Hall of Fame Game, shown nationwide, were 18% lower than the same game the year before.

“Predict the Game” may be a first for the Redskins and the NFL, but not for Washington D.C.’s WRC-TV, which also offered it for eight Washington Wizard NBA games last season.