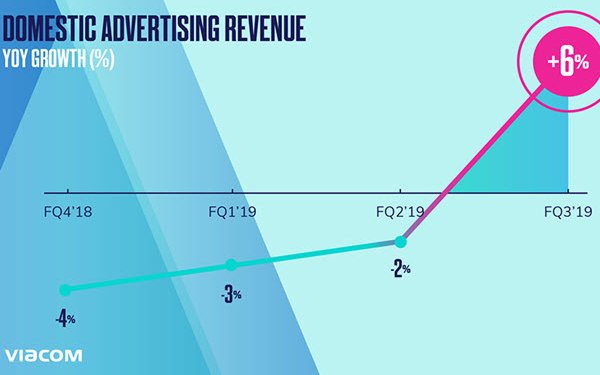 Viacom’s domestic advertising revenue increased by 6%, to $976 million, in its fiscal third quarter -- marking the first growth since Q3 of fiscal 2014, the company reported this morning in its summary of financial results for the period ended June 30.

The results come as Viacom and CBS continue their merger talks. CBS is set to release its own quarterly financials after today’s market close. While the industry had speculated that a deal would be announced during the quarterly reports, sources told The Hollywood Reporter that the companies are continuing to negotiate the share exchange ratio/price, and a deal could be announced by next week.

Viacom said that its U.S. advertising growth was driven by “continued acceleration” in its two-year-old Advanced Marketing Solutions business, and that the company is also on track to deliver U.S. ad growth for the full year.

However, domestic affiliate revenue declined by 1% in the quarter due to subscriber declines, “partially offset by higher contractual rates and OTT and studio production revenues.”

Viacom also reported strong results from the latest upfront, supporting a positive outlook for fiscal 2020. The company realized “high-single to double-digit price increases, representing the highest rate of change in more than a decade,” and saw agency commitments across its digital, social and advanced advertising properties, it said.

AMS, which offers ad targeting and branded content solutions, brought in $343 million in 2018, and is projected to double that this year, Viacom CEO Bob Bakish reported during last December’s UBS Global Media and Communications Conference.

The advertising growth is based on AMS’s continuing to introduce new solutions and expand access to inventory for dynamic ad insertions.

The Pluto AVOD this week announced that it’s introducing 13 more “pop-up” channels based on Viacom programming — starting with music channel Yo! MTV, Comedy Central Roasts and TV Land Sitcoms. In total, the platform added 28 new channels during the third quarter.

Viacom’s Q3 report included the news that Pluto’s average monthly users have increased by 50% in this calendar year, to date, and hit 18 million as of July.

Overall, the company beat expectations for the quarter, with 3% growth in diluted earnings per share, to $484 million or $1.20 per share, versus $475 million or $1.18 per share, in the year-ago quarter. Analysts had projected EPS of $1.07, on average.

Viacom maintained its #1 share of U.S. basic cable viewing among key demographics, and its networks collectively grew share by 1% year-over-year, according to its report.

The quarter also marked the company’s tenth straight quarter showing year-over-year improvement in adjusted operating income at its Paramount film unit — which is on track to show a profit for the full year, Viacom said.

However, adjusted operating income for the media networks unit declined to $748 million on revenue of $2.5 billion, which Viacom attributed to investments in programming marketing and “key growth initiatives.”

“Viacom delivered another strong quarter, as our core businesses and investments in strategic priorities fuel our growth and evolution," stated Viacom CEO Bob Bakish, who would be CEO of the combined company if Viacom and CBS merge.

“As this quarter shows, Viacom’s brands are strong, our strategy is delivering, and our investments continue to position us well for the future,” he added.