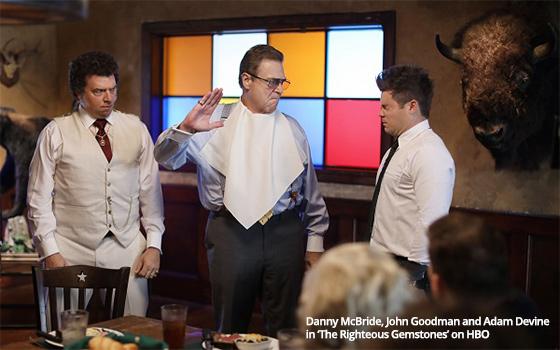 From the unique perspective of Danny McBride comes his latest creation for HBO -- a comedy about a family of televangelists.

Like him or not, McBride's commitment to his subject matter is perhaps his most admirable quality as a creator, producer, director, writer and actor. This new series -- titled “The Righteous Gemstones” and premiering this coming Sunday night -- is his third for HBO.

Like the others, this one represents McBride's take on a particular micro-world -- in this case, the world of a televangelism dynasty whose Sunday services fill a cavernous arena in a region of the country that is not specified.

McBride's previous series for HBO were “Eastbound and Down,” in which he starred as a washed-up former minor league baseball player with the ego of a Major League superstar, and “Vice Principals,” in which he also starred, this time as vice principal of an American high school.

In “The Righteous Gemstones,” McBride plays one of two sons of Eli Gemstone (John Goodman), scions to a televangelism empire built by Eli and his late wife, the sons' mother. The other son is played by Adam Devine (photo above, left to right: McBride, Goodman, Devine). There is also a grown daughter played by Edi Patterson.

Anyone familiar with the characters McBride played in “Eastbound” (the immortal Kenny Powers) and “Principals” (Neal Gamby) will recognize both of them in his portrayal of Jesse Gemstone.

Pointing out that the characters McBride plays are more or less the same is not a criticism of what some might perceive as a deficit of acting talent.

On the contrary, the way in which McBride embodies his characters has become his brand. Suddenly acting otherwise would likely end his career as a creator of comedies for HBO. He and his characters form the chief reason why anyone should watch McBride's comedies.

One reason that McBride's achievement is so notable is because the characters he plays are not at all attractive or likable. Instead, they are the most loathsome and unlikable characters in the shows. Indeed, they are among the most purposely obnoxious characters ever created for television. They are hugely entertaining to watch.

This is no less true in “The Righteous Gemstones,” in which his character's amorality threatens to sink the entire family enterprise. This make-believe man of the cloth is greedy, selfish, unfaithful and sinful.

McBride's total commitment to playing his characters also extends to his role as executive producer (along with long-time producing partner Jody Hill). In “The Righteous Gemstones,” no expense appears to have been spared to create the world of this televangelist family.

The show is a visual cornucopia of mansions, expensive cars and custom-painted private jets. When watching the show, it is reasonable to wonder if “The Righteous Gemstones” might be the most expensive comedy ever made for television.

At the very least, it gives evidence that HBO is continuing to spend as it always has in its effort to continue to compete with rivals who are just as deep-pocketed -- namely Netflix. Whatever HBO has paid McBride over the years, it is money well spent.