How Brands Can Thrive Amid Consumer Distrust

The era of “fake news,” populism, and declining faith in institutions has eroded public confidence in virtually all information sources.  Google Trends shows that the word “fake” has generally surpassed “trust” as a search term, beginning around the time of the 2016 Presidential election.

Marketers and technology companies haven’t helped things, with the advent of “fake influencers,” concerning data breaches and worries over spying on consumers. The trend is spurring major brand marketers to look for new strategies to communicate with skeptical consumers.

Marketers need to rethink their decisions about media, consumer targeting, messaging, and spokespersons in order to succeed in an era of consumer distrust. 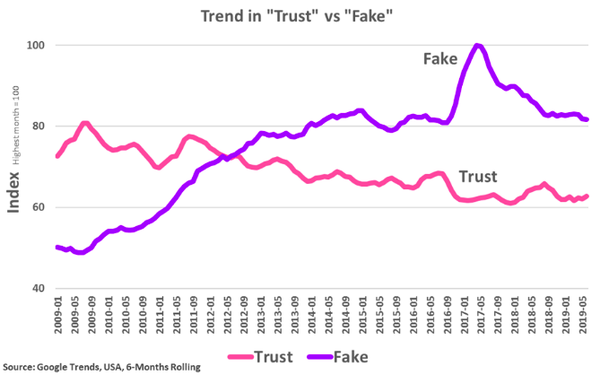 UM’s long-running Wave global survey recently explored the issue of trust and found disturbingly low confidence in the perceived “truthfulness” of virtually every information source in our lives. For the first time, the study asked how often each of 13 information sources were “truthful,” using the following answer choices:

The groups being rated ranged from experts and family members to bloggers and the government. The big eye-opener is that in the United States, no group — not even experts and family members — was rated truthful over 75% of the time by even one-third of the public. That suggests the US public believes their own family members are liars at least one-fourth of the time! Indeed, according to anther UM survey, Media in Mind, among those who live with their spouse or partner, only 54% agree a lot that they trust my partner completely. 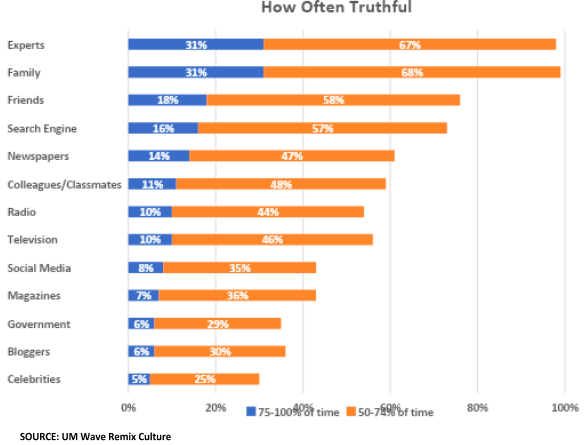 While no group is broadly trusted, there are significant differences among groups. When we combine answers to see who is thought to be truthful at least half of the time, we find that two-thirds of the public give reasonable credibility to both experts and members of their families. A majority also trust friends and search engines at least half of the time.

Just under half of the public think the following groups are truthful most of the time: Colleagues/classmates; newspapers; and television. At the bottom of the list? Bloggers, the government, and celebrities. The American public now places the credibility of government alongside bloggers and celebrities.

Because this question about trustworthiness was a new Wave question, we don’t have the past trend. But the study did have a trend for whether people are “influenced by opinions shared online” and whether they “trust bloggers/vloggers” opinions on products and services. The trends are steeply down since the prior wave that was in the field just prior to the 2016 election and released in 2017. 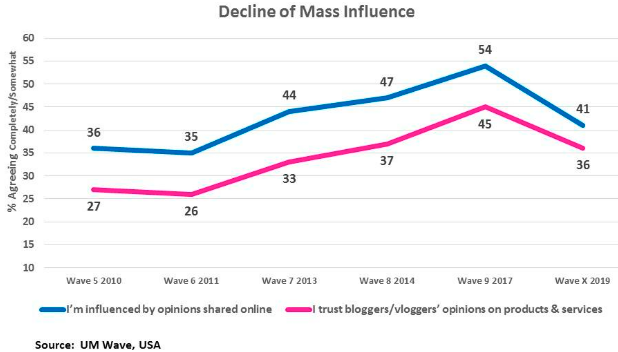 Interestingly, key ethnic segments, Latinos and African Americans, appear to be more resilient to the recent downward shift. Both demographics are above the current levels, with Latinos +6 points higher and Blacks +2 points higher. Key positive drivers of this uplift among Blacks include celebrities, musicians and bloggers, who score relatively some +40% higher than the US average in their strength of influence.

Another prominent source on the general US trends is the public relations firm Edelman, which has maintained a Trust Barometer since 2001, and has been talking about a “trust crisis” since 2017.

For marketers, these trends raise serious questions about how to communicate with the marketplace. How do we earn credibility in an environment of disbelief?

The single most important step we can take is to leverage the remaining credibility of friends and family — in other words, word of mouth. An Engagement Labs study published this year in the MIT Sloan Management Review found that 19% of all purchases are driven by conversations about brands, whether they happen face-to-face or through social media. Encouraging people to talk about — and recommend — those brands to people they know, can be highly effective in driving purchase intents.

A word-of-mouth strategy does not mean abandoning media. Engagement Labs’ analysis finds that one-fourth of all brand conversations are stimulated by paid advertising. Word of mouth has always been an important factor in supercharging advertising and marketing — we just haven’t paid enough attention to it.

Here are some strategies and tactics for brands to consider:

The Factors Influencing Us to Say Yes

In his seminal book, The Psychology of Influence, Robert Cialdini identifies six key techniques of influence. These include not only “Authority” and “Liking,” which reflect the phenomena that consumers follow experts and people they like, but also point to “Social Proof” where people will follow what they hear and see others saying and doing.

The route to influence is not a one-trick pony. Cialdini advocates varying the influence message, tailoring it to both the audience and the intent.  Critically for our trust-deficit age, he notes: “the greater the number of people who find an idea to be correct, the more the idea will be correct.”

Truth, like beauty, is in the eye of beholder.

Hopefully, this era of distrust will be short-lived, but “hope is not a strategy.” Some of the strategies we must use in today’s climate will also serve us well in the long run.

We are entering a new era of media literacy where consumers are not only becoming increasingly savvy at avoiding conventional forms of advertising, they are also more skeptical of what they are being asked to believe. Upshot: Brands that are able to stimulate authentic human-to-human sharing will always come out ahead.